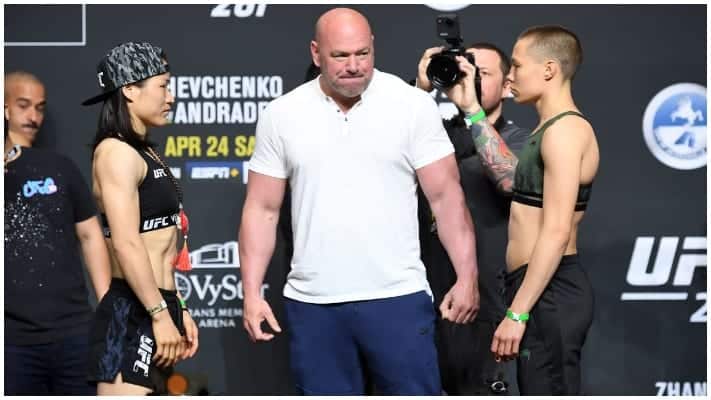 Zhang Weili has some suggestions for the location of a potential rematch between her and Rose Namajunas. After getting booed the entire week leading up to the fight, Zhang wants the next one at a neutral location.

At UFC 261, Namajunas knocked Zhang out in the first round with a head kick. It was Zhang’s first career knockout loss and after the crowd in Florida showered her with boos. Zhang admitted that the crowd and the boos did affect her performance and now wants another chance at the belt.

During a livestream, Zhang shared some thoughts about a potential location for the rematch. (H/T mmanews.com)

“Ideally, we would like it to be held in Abu Dhabi,” Zhang said. “This location is neutral to both parties. But now, Rose is the champion, so it might not be up to us. The table has been turned.”

Zhang makes a great point in the fact that Namajunas is the champ now and can do what she wants. One does have to wonder if the location was different, would there be a different outcome?

Either way, Zhang seems ready to move on from her whole UFC 261 experience. Later on during the livestream, she makes comments on how she feels about Namajunas.

“I don’t want to comment on Rose,” Zhang said. “I wanted to touch gloves with her in the fight but she didn’t do it. So I think … I wanted to make friends through MMA, but the other person doesn’t think like that. So oh well. Joanna, I think Joanna is quite cute. She is good, she is cute. She makes things clear and not tries to hide anything. But Rose, she is smart. Very smart.”

UFC President Dana White has hinted at a rematch between the two could be next. However, with Carla Esparza winning against Xiaonan Yan this past weekend, the UFC could go in a different direction.

Do you think a neutral location would have any impact on a rematch between Zhang Weili and Rose Namajunas?