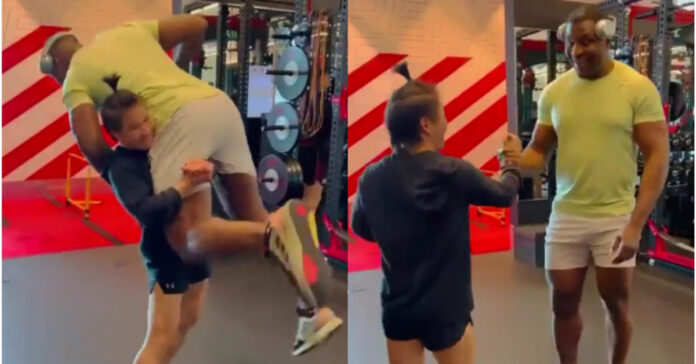 Former UFC strawweight champion Zhang Weili is just days away from the opportunity to recapture UFC gold at UFC 281 on November 12th.

Weili will be the first to challenge new strawweight queen Carla Esparza after ‘Cookie Monster’ scored a split decision win over ‘Thug’ Rose Namajunas in what many called the worst fight in UFC history. Nevertheless, Esparza earned the victory and began her second reign 2,612 after her first reign came to an end.

Deep into preparation for the highly anticipated UFC title fight, Zhang Weili put in some work at the gym alongside UFC heavyweight champion Francis Ngannou. In a clip posted on Ngannou’s Twitter, Weili is seen impressively picking up the 239-pound heavyweight with relative ease.

“I can’t believe that @zhangweilimma just picked me up like I wasn’t 293lbs. I didn’t want her to do it I was scared of her hurting her back and was trying to explain this to her….then found myself suddenly up in the air. Her strength ratio is through the roof.”

Zhang Weili is known for her standup wars, specifically her 2020 Fight of the Year against former women’s champion Joanna Jedrzejczyk and their subsequent rematch at UFC 275. At UFC 281, Weili will fight a woman whose success primarily comes on the ground rather than the feet. Riding a six-fight win streak, Esparza is notorious for getting her opponents to the ground and grinding out a win. That will be a unique test for Weili who has typically only fought other strikers.

READ MORE:  Opinion | Who is to blame? Francis Ngannou vs. The UFC

“Because Joanna and Carla, they are different fighters… Joanna is a stand-up fighter, Carla is a wrestler, so our tactics will definitely have some changes,” said Weili in an appearance on the Fruiting Body Podcast. It’s my first time fighting a wrestler, I’ve never fought a wrestler before,” she concluded. “I’m very excited and I also want to test my wrestling and my controlling skills.”

While Esparza is known for wrestling her opponents into oblivion, Zhang Weili is a much different fighter. In 22 career wins, Weili has 11 victories by way of knockout and another seven via submission. If Weili can fend off the relentless takedowns of Esparza, she stands a good chance of catching ‘Cookie Monster’ who will have a significant disadvantage on the feet. If Esparza is able to implement her wrestling, it will be a very long night for Weili and the fans watching UFC 281.