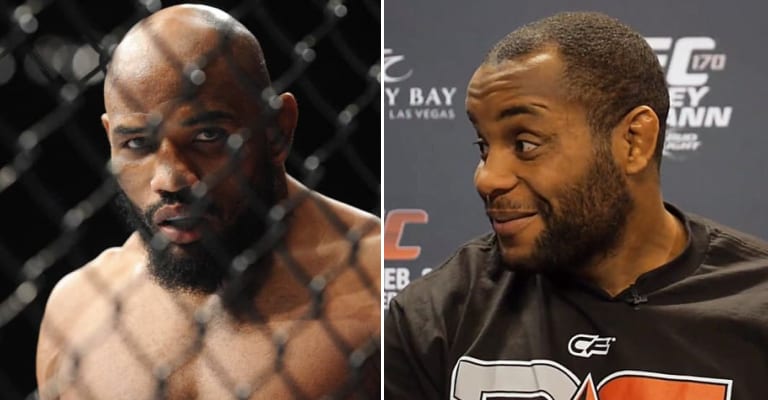 After all, the “Soldier of God” has lost two of his last three fights to middleweight champion Robert Whittaker, and he’s also missed weight prior to his last two. So while a move up to 205 pounds may be a smart career decision overall for the Cuban bulldozer, being one of Cormier’s rumored final two fights in his career just doesn’t make much sense.

The new double-champ revealed as much on last night’s “UFC Tonight,” insisting that Romero may have beaten him in wrestling back in the day, but based on his recent UFC track record, he couldn’t ‘fail a class and move up a grade’:

“Here’s the deal: I never wrestled Yoel Romero, but in wrestling, he probably would have served me up. He’s one of the great wrestlers of all-time. But, you don’t fail a class and then get moved up a grade to the next one.”

A fair bit of logic from the UFC’s new pound-for-pound king, yet it didn’t stop Romero from clapping back with his own example of Cormier’s rival Jon Jones supposedly ‘failing a class’ by failing a drug test prior to UFC 200 and then returning to knock “DC” out at last year’s UFC 214:

The last time somebody “failed a grade and moved up a #class “ look like it work good @dc_mma #iseeyousoonboi #iluhju pic.twitter.com/9ALIdFLE3h

A tough comparison to be sure, however, because as mentioned above Romero has lost two of his last three and missed weight before his last two. While Jones obviously has a ton of issues with both recreational and performance-enhancing drugs, he technically never lost (except by disqualification early in his career) and also never missed weight.

So while both “Bones” and Romero have some not-so-desired qualities on their resumes as of late, suggesting that he should get a title shot because Jones got one coming off a suspension just doesn’t make a ton of sense, and it beyond highly unlikely to happen.

Cormier has two fights left, or so he says, and one of them is going to be against Brock Lesnar. The other, well, even if it is at light heavyweight, it probably won’t be against a normal middleweight who has yet to win a fight at 205 pounds. In fact, it definitely won’t.

Kudos to Romero for keeping his name towards the top of MMA discussions, however.