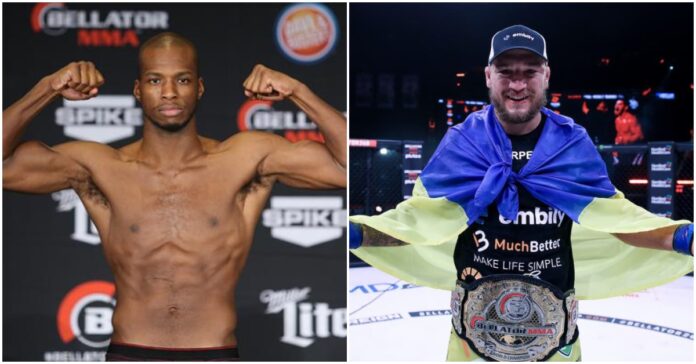 Michael Page will be making his first attempt to secure Bellator Gold on his home soil.

Bellator president Scott Coker has announced the promotion is targeting the matchup for the second quarter of 2022, with the newly crowned champion set for his first title defence to take place in the United Kingdom.

“We are in the process of putting that fight together now with him and MVP to fight in London at some point early next year.”

Michael Page was and still is destined for greatness in Bellator. He suffered his first loss at the hands of Douglas Lima in 2019 when the Brazilian caught him with an uppercut. Since then, Page has gone on to collect a 6-fight winning streak, 4 of those coming via stoppage. Page would also go on to exact his revenge when he edged out Douglas Lima at Bellator 267 via decision and propel himself into a title fight opportunity.

Although it wasn’t the title Michael Page was interested in at first. Scott Coker revealed how the Englishmen wanted to complete his trilogy with Douglas Lima before taking that next step, however, he was able to convince him to do otherwise.

“I know MVP was kinda back-and-forth, do I want to fight Lima again, do I want to fight Amosov and then we said Hey, just go think about it,” Coker told MMA Junkie. “Our opinion as a company is you want to take the next step. You want to go fight for the belt now. This is your time. If you don’t do it now, when are you gonna do it? and then you can come back and fight Lima again in the future. So to me, it’s the right fight to put together. I think it’ll happen in the second quarter. It will be in London and it will be a massive fight over there because he’s such a big star.

“Believe me, a lot of people are saying well Amosov is so good and he’s – yeah he is that good and that’s why his record is undefeated. But MVP has a very unique style and he’s very hard to hit, to catch and it’s gonna be interesting to see how Amosov handles that because he’s fighting like a very awkward, karate style combatant and it’s not like your normal MMA fighter that’s just very straight forward, maybe a little bit more linear. He’s doing a lot of crazy stuff and that’s why people love him, but that fight will happen at some point in 2022 for sure.”

Do you think Michael Page will become a champion in 2022?