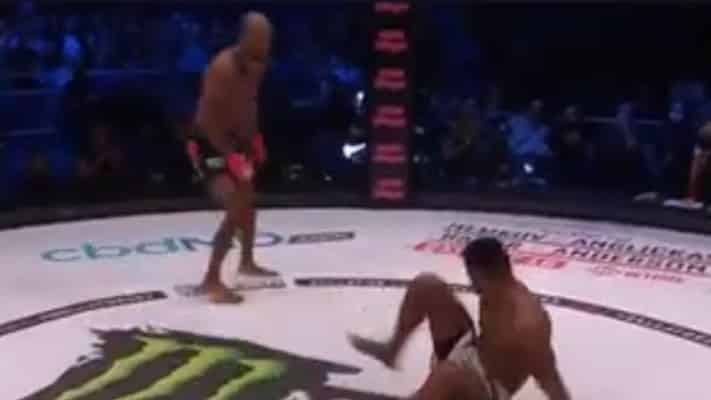 Lima and Page get right to work in the opening minute of the fight, meeting in the center of the Bellator cage. Page lands the first strike of the bout, a stiff body kick that forces Lima backward. Lima trips and falls but quickly gets back to his feet. Page clocks Lima with a big right hand that briefly drops him. Lima seems a bit timid and is waiting to pick his shots. Halfway through the round, Lima scores a big takedown and forces Page to try to work off his back. Lima seems content holding Page down and landing some hard ground-and-pound strikes, forces Page against the cage. In the closing seconds, Lima lands a hard thigh kick as Page is down.

The second round begins with Page trying to find his timing on the feet. Page lands a stiff jab that briefly stuns Lima. Lima is continuing to try to throw the low calf kick but is failing to land so far. Lima finally lands a low calf kick that briefly drops Page, but Page is able to get right back up to his feet unlike in their first bout. Page throws a big right hand that fails to get through Lima’s guard. Lima is starting to find his timing with his kicks and nearly lands a big head kick. Page makes a statement with a big right hook that drops Lima, appears wobbly afterward as the second round concludes.

In the third and final round, Page is the more aggressive in the opening seconds, but Lima lands another hard punch that appears to drop Page briefly. Page nearly gets caught on the way back up by another knockout blow. The two trade shots on the feet before Lima lands a big takedown with about two minutes left. Lima doesn’t land a lot of strikes on the ground as Page attempts to transition to his feet. Despite this, Lima is able to hold Page down and lands a couple of nasty elbows as the fight ends.

Check out the highlights from Page’s win over Lima at Bellator 267 in London, UK.