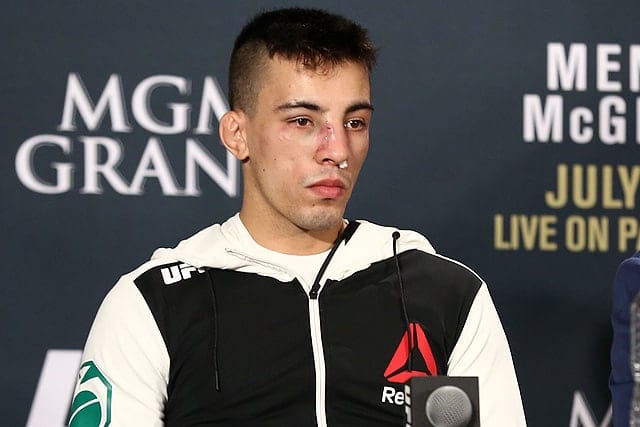 Rising bantamweight prospect Thomas Almeida is coming off the biggest win of his career, as he recently scored an amazing flying knee knockout over veteran Brad “One Punch” Pickett at July’s UFC 189.

Now ranked in the top-10, the Brazilian knockout artist recently made it clear that he would his next fight to be in his home of Brazil on November 7, 2015 at UFC Fight Night 77. Almeida also express interest in facing off with No. 6-ranked Bryan Caraway.

There hasn’t seemed to be a response from Caraway, and Almeida is looking to get a fight booked. Recently speaking with Combate, the rising 135-pounder said that he is set on fighting on that card, and if a fight with Caraway doesn’t work out, Almeida would be happy to take on No. 8-ranked Takeya Mizugaki:

“There will be an UFC event in Sao Paulo on November 7. I asked to be on the card and I’ll be glad to fight in my hometown, but no matter the place, I want to work,” Almeida told Combate. “I already said I wanted Caraway, who’s above me in the rankings, it would be a great fight, but nothing came of it. So there’s another guy it would be good to face. Mizugaki, a Japanese striker. I think our styles match and I would like to face a foreigner in Sao Paulo. Mizugaki has a good ground game, but I feel it would be a striking match, since he likes to exchange blows. I broke my nose in my last fight, but next week I will start sparring again, so I’m 100%.”

Despite being ranked higher than Almeida, Mizugaki has hit some rough times as of late, dropping back to back losses to Dominick Cruz, and most recently Aljamain Sterling. However, he has proven to be a tough and skillful fighter, and may provide for an exciting test for Almeida.

Who would you pick to win this potential bout?