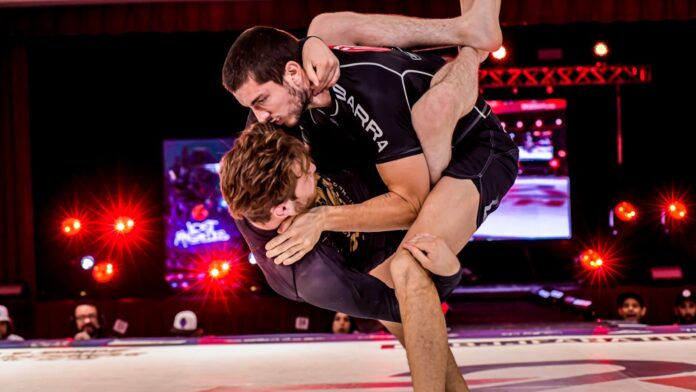 Submission grappling has gained a lot of traction lately. Many events have popped up and are focusing on no-gi style tournaments and super fights. The next ADCC is also looming on the horizon and has the world buzzing with excitement. The ADCC Worlds is the most prestigious submission grappling tournament and will hold an event for around 11,000 spectators live in 2022.

With these in mind, it is natural to ask this question: Will submission grappling become the next spectator sport?

What Is Submission Grappling?

Submission grappling combines all grappling style martial arts such as Brazilian Jiu-Jitsu (BJJ), Catch Wrestling, Judo, Sambo, Greco-Roman, and Freestyle wrestling. It is a martial art that focuses on controlling and submitting the opponent with the use of submission holds. John Danaher, considered as one of the best coaches who changed the game in the modern era, said that it is the science and art of control that leads to submission.

In Brazilian Jiu-Jitsu, the aim is simple: to submit the opponent. It can be done through either speed or control-based submissions. Grappling is a technical sport but can be highly entertaining as well. This is especially the case if the rules allow for more dynamic exchanges. For a spectator new to the sport, watching two grapplers relentlessly trying to get a dominant position in hopes of getting a submission later on is extremely exciting.

Exciting matches are what call and retain the attention of untrained eyes. However, it is not enough to win matches, especially if we look to make submission grappling a big spectator sport. Nothing is exciting about a match that is decided over a slight advantage. While it is not realistic to expect every match to be a headliner, perhaps the competition’s ruleset might help make things exciting for all people involved.

Submission grappling is fascinating to watch, especially for those who have trained in BJJ for years. However, it is safe to say that not all events are created equal. If you are new to the sport, these are our top recommendations for you to watch.

The original idea of ADCC is to supplement MMA training with various martial arts such as BJJ, wrestling, Judo, and Sambo. Its goal is to promote a healthy lifestyle by educating its members about nutrition and training in all types of martial arts for self-defense. Sheik Tahnoon, the president of ADCC, came across different styles of grappling martial arts. He came up with the idea of putting all types of grappling arts in a tournament to settle the question of which style is the best. He established a neutral set of rules, allowing all types of submissions besides spinal attacks. He invited the best practitioners of each art to compete without strikes, and from there, he created the first ADCC tournament in 1998.

Submission grappling has been in a constant state of growth since its inception. According to David ‘Silverfox’ Karchmer, a BJJ black belt and one of the most experienced referees in the United States, ADCC will have to add some ideas to make the event clearer for everyone. Doing this may eventually attract more audiences. He pointed out that the ADCC has to produce a detailed written rule book and adopt border enforcement, preventing athletes from intentionally going out of bounds.

The Quintet Grappling Team Survival Match was created by MMA legend Kazushi Sakuraba and the promotional help of UFC Fight Pass. Its goal is to make grappling entertaining for the spectators, allowing slams but prohibiting heel hooks. Quintet introduced a unique format, with five grapplers on each team competing against each other. If a grappler wins his first match, he continues to face the next opponent from the opposing team.

In case of a draw, both athletes will be removed. The match continues until the last grappler of the team loses. The total weight of each group must be under 430kg, with 8 minutes between matches. Matches could be reduced to 4 minutes if there is a weight difference greater than 20kg between the two competitors.

Polaris is a UK-based grappling promotion established in 2015 that features the best Jiu-Jitsu fighters and grapplers worldwide. Similar to ADCC and Quintet, the goal of Polaris is to produce exciting grappling matches for the fans to indulge in. It is one of the first events that featured many high-level super fights.

Polaris played a significant role in the popularity of submission grappling in the UK and is known for its accommodating treatment towards its athletes. From the onset, Polaris has shown a lot of promise and is a great package overall, from its presentation, commentary, and booking. It has attracted many world-class athletes to compete and has gained many fans worldwide as well.

One of the most exciting matches on Polaris was between Garry Tonon and Rousimar Palhares. Polaris referred to it as one of the best grappling matches of the modern era, with both athletes notorious for their exciting styles and leg lock game. You simply have to watch it to see what the hype was about.

Submission grappling is currently experiencing a resurgence, with many promotions getting new viewers at every event. Matches with explosive wrestling, throws, takedowns, and submissions might captivate casual fans. Still, it is not guaranteed that they’ll stay with the sport after the initial glitter is gone.

The key in making submission grappling a spectator sport is to find the right balance between a great ruleset so that athletes are free to express their game the best way possible, and attract the best competitors in the world. It is also essential to give these events a platform where many new viewers can see them.

So to answer the question – will submission grappling become the next spectator sport? The answer to this is that it is very possible, provided that proper education and exposure to the sport is executed well.