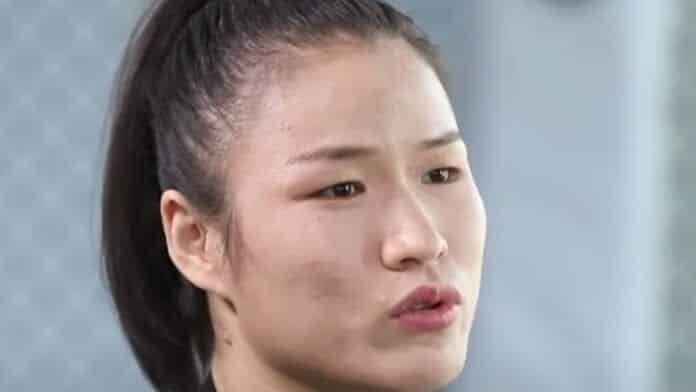 Weili Zhang is not bothered about the recent comments of Rose Namajunas.

Namajunas created a stir recently when she detailed her motivation for her upcoming women’s strawweight title fight with Zhang at UFC 261 on April 24.

“I was just kind of reminding myself of my background and everywhere that I come from and my family and everything like that, and I kind of wanted to educate my training partner [on] the Lithuanian struggle and just the history of it all, so we watched ‘The Other Dream Team’ just to kind of get an overall sentiment of what we fight for. Just after watching that, it was just a huge reminder of like, yeah, it’s better dead than red, you know? I don’t think it’s any coincidence that Weili is red. That’s what she represents. It’s nothing personal against her, but that’s a huge motivating factor of why I fight, and I fight for freedom.

“I’ve got the Christ consciousness, I’ve got Lithuanian blood, and I’ve got the American dream. And all of those things I’m taking with me into the fight.”

The implication, of course, being that Zhang was a supporter of communism since she hails from China even though she hasn’t publicly shown her support.

Namajunas would since double down on her comments stating that she doesn’t regret making them. So what does Zhang make of what she’s had to say?

Not very much according to strength and conditioning coach Ruben Payan Jr.

“Let me tell you the truth, and we’ll make a statement next week cuz the media will be asking,” he said in a recent interview. “To be honest with you we haven’t been paying attention. It’s been like watching it but not feeling it. This is the soap opera that’s happening but we aren’t really engaging in it because we’re just so focused on the fight. It hasn’t even been a topic for the team. I wish there was something more that I could say, but it’s like … non-emotional. There’s really nothing to say if you’re not really emotionally attached to it.

“You’re just kind of watching things happen and you’re watching people talk about it,” he continued. “And you see people get upset about it. And you see the comments but you’re not involved in it. That’s kind of how it feels. Even though some of the comments are directed towards her, there’s so many non-truths to it that it’s like we’re not even going to pay attention to it. That’s kind of how we feel.”

It will be interesting to see what Zhang says when she’s asked about it directly during fight week.