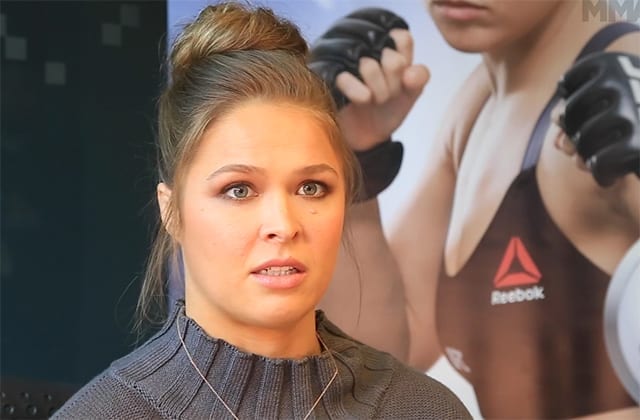 Former UFC women’s bantamweight champion Ronda Rousey has always had a prickly demeanor, and that happened to be on full display after she misinterpreted a question from Mike Golic on ESPN’s Golic & Wingo Tuesday.

Rousey snapped back after a seemingly innocuous question from Golic, who had asked her whether or not she’d consider returning to MMA. He may have worded it a bit strangely by asking if she would ‘go back’ to fighting ‘in time,’ to which Rousey misunderstood that he was asking if she could actually go back in time:

“‘There’s a possibility that I could go back in time?’ That’s your question to me?” Rousey replied. “I do not have the ability to go back in time, no.”

Golic was miffed but clearly trying to keep things cool, so he rephrased his question to ask if she would fight again.

An angry Rousey made things even more strange by replying shortly that she didn’t know if she would return despite essentially closing the door on an MMA return in prior interviews.

Rousey joined WWE to begin her professional wrestling career after suffering two brutal stoppage losses in a row to Amanda Nunes and Holly Holm before leaving MMA altogether – at least for the time being.

While she hasn’t had an actual wrestling match yet, she claims that the WWE will be her main focus for the next few years.

What did you think of Rousey’s reaction?