LowKickMMA.com
Home UFC News Vitor Belfort: I Was Tested Seven Times For My Fight With Weidman... 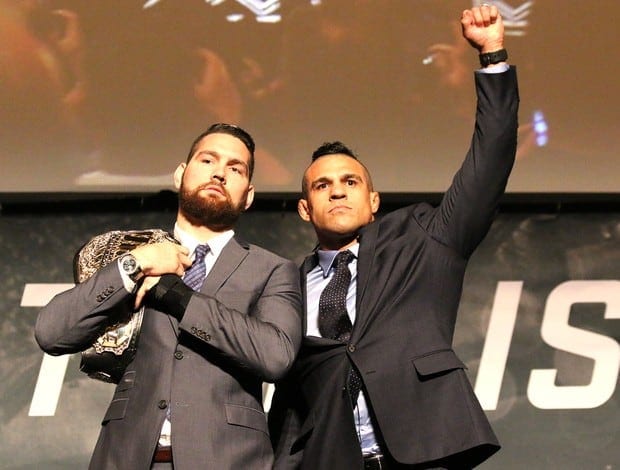 Vitor Belfort isn’t happy with the way that the random drug testing has been handled for his scheduled middleweight championship bout against Chris Weidman at May 23’s UFC 187 from Las Vegas, Nevada.

Long a target of both the media and athletic commissions for his highly publicized use of testosterone-replacement therapy (TRT) and two prior failed drug tests for steroids, ‘The Phenom’ still believes he isn’t exactly getting a fair shake.

His bout with Weidman has been rescheduled three times – the first took it off May 2014’s UFC 173 when TRT was banned and Belfort had to withdraw, and two injuries to Weidman forced it to be stricken off of both UFC 181 and UFC 184 before it finally landed on UFC 187’s blockbuster lineup.

Belfort has been a staunch critic of his opponent’s inability to make it to the Octagon, and now he wonders why Weidman isn’t getting the same treatment he is in terms of drug testing.

Speaking to the Brazilian media (via MMAFighting.com) during last Saturday’s (February 28, 2015) UFC 184, ‘The Phenom’ said that he’s been randomly tested seven times, a number that is far from on par with how many times Weidman has been tested:

“In 2013, I was the only one (tested randomly). I was tested seven times for my fight with Weidman. Seven times. Did they test my opponent seven times?”

It’s tough to decipher exactly what Belfort means here, because in 2013 he knocked out Michael Bisping, Luke Rockhold, and Dan Henderson with destructive head kicks while inciting a small brush fire with his controversial use of TRT. He didn’t fight in the United States once in 2013, and many felt that he was hiding behind the lax regulatory boards present for MMA in his native Brazil.

He also wasn’t scheduled to face Weidman until May of 2014, so perhaps he has his years mixed up. Anyway, it was Belfort’s failed drug test for elevated testosterone in February 2014 that prompted the Nevada State Athletic Commission (NSAC) and the UFC to get rid of TRT for good, a move they greatly expanded upon by enacting stringent out-of-competition (OOC) testing for many marquee fighters.

‘The Phenom’ has seen the initial ramifications of the UFC’s new drug testing policy, which will go into full effect this July 1. As he’s done in the past, Belfort took the opportunity to blast fighters for doing the same thing that he has been caught doing twice before:

“The funny thing is that everybody is clean, nobody do anything wrong. But when they started testing everybody, how many got caught? Forty percent? That shows that for the system to work, everybody has to be tested equally,” he said. “If they come test me for my fight with Weidman, they have to go test Weidman as well on the same date, same time. That’s an equal system. It has to be fair. It’s not fair that they test me seven times and only test him once.”

He may have a solid point, but it’s also incredibly tough to put himself on par with a fighter who has never tested positive versus one who has tested positive twice and singlehandedly brought on the banishment of TRT amidst a windfall of criticism that he had found a way to cheat the system.

Yet he’s an open book these days, urging his employers to test both his blood and urine on a daily basis, as long as they do the same for whomever he’s fighting:

“We know how the system works these days. I don’t think the athlete does anything he doesn’t know, so I want them to test me every day. Come take my blood, my urine, but has to be equal for everyone.”

Many will find a bit of irony in the way Belfort has come down on the nature of his drug tests for his bout with Weidman, and you’d be hard-pressed to argue with them. He may be clean right now, and he may be correct in wanting an equal playing field for all fighters, but ultimately he just isn’t going to get much sympathy with his reputation as a steroid abuser looming large.

Do you believe he has any right to blast the system in place or how the testing has been handled?