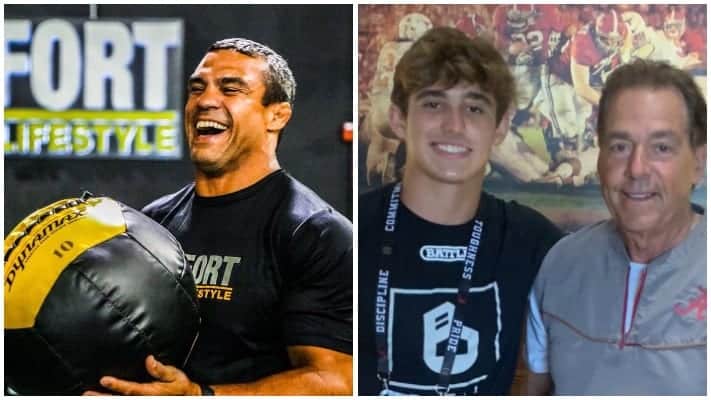 UFC Legend Vitor Belfort‘s son, Davi Belfort, is making waves in the sports world of his own.

The younger Belfort has secured an offer from Nick Saban to take his talents to the University of Alamba when he finishes high school. There’s just one thing. Belfort hasn’t even started high school yet.

The rising freshman has yet to take a single snap in a high school game. Yet, the offer from Alabama is Belfort’s third. He’s also received offers from Arizona State and Florida Atlantic. Belfort took to Twitter to announce the offer, with proud papa retweeting his post.

As odd as it may seem, many colleges have begun actively recruiting and making offers to middle school athletes viewed as five-star prospects. As a 6’0, 185-pound eighth-grader with great potential at the quarterback position, it’s no surprise that scholarship offers are already coming in.

Belfort will start high school in the fall at the prestigious Cardinal Newman High School in West Palm Beach, Florida, and play under coach Jack Daniels. Daniels, who has coached the likes of Miami Dolphins quarterback Jacoby Brissett and several Division I quarterbacks, will likely help Belfort develop the skills he will need at Alabama.

Recently interviewed by his local newspaper, Belfort was humble and excited about the offer.

“They saw me throw in the morning part [of the camp] and then after the morning part was when they decided to offer me,” Belfort said. “He (Saban) called me in his office and we had a great conversation. He said he normally doesn’t offer kids that early. He’s really excited to see me grow and develop on the high-school stage. He said he’s definitely going to be watching me.”

“It was definitely a surreal moment,” Belfort said. “It was an honor talking to one of the greatest coaches in the history of college football, it was such an honor, it was amazing.”

Davi Belfort inherited Vitor Belfort’s athleticism. He also inherited his approach to the pressures of competing at a high level.

“[The offer] definitely doesn’t put any pressure on me. … Some people think it does, but I don’t see any pressure to it,” Belfort said. “I’m just really happy. If anything, it takes pressure off of me. I’m not worried about if it takes pressure off of me or not. I’m just worried about my fall season. I can’t wait to keep on getting better. As soon as I get home, I’m going to get back to what got me to this point, and I still have a lot to improve in my game.”

How do you think Davi Belfort will perform once he gets to Alabama?