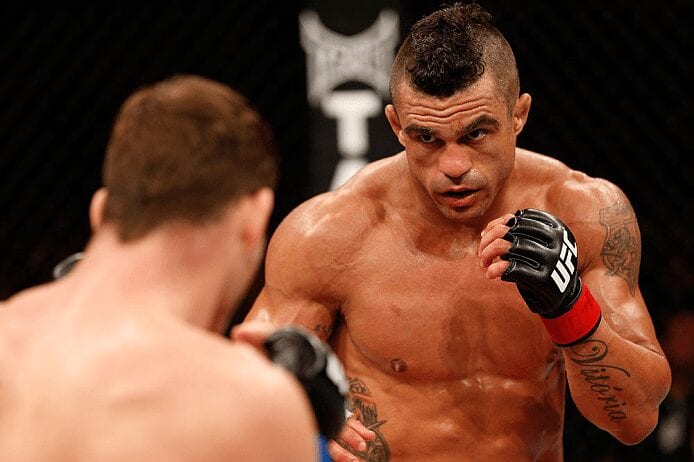 UFC middleweight Vitor Belfort will look to become champion once again in 2015, this time challenging Chris Weidman for his title at UFC 184 in Los Angeles, California. “The Phenom” has certainly been through the mill in 2014, being unable to fight because of the TRT ban, and taking front row in the media storm that surrounded the subject.

Now officially clean, Belfort can focus on training for what would be a record breaking night if he is victorious. Only problem there is that Weidman is younger, hungrier and is riding high on two wins over Anderson Silva and one over Lyoto Machida. The common opinion is that Belfort may be in trouble here, especially without TRT.

Well, if the following Instagram post is anything to go by, the Brazilian knockout artist still has plenty in the tank:

Check out the guns on Vitor! So the TRT ban hasn’t drained Belfort to the point that many of us may have suspected, and what if he shows the same form as in 2013? “””The Phenom” crushed Dan Henderson, Luke Rockhold and Michael Bisping, all by devastating head kick knockouts. Many believe that Weidman will beat an over-the-hill Belfort, but it simply may not be the case… Do you think Vitor Belfort can make history against Chris Weidman, or will “The All-American” make it a short night for “The Phenom””?