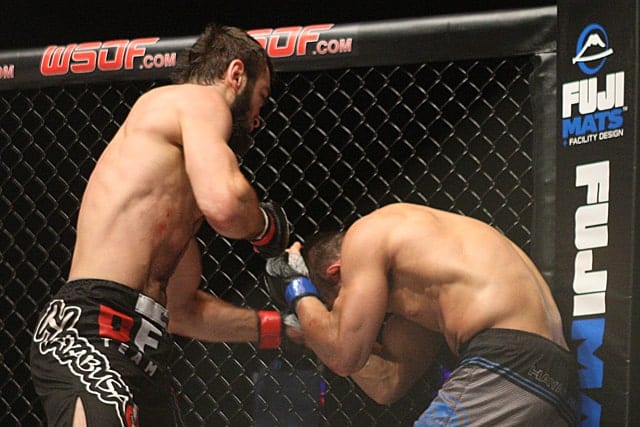 World Series of Fighting 23 went down on Friday September 18th, kicking off a packed weekend of non-UFC action. It was reasonably lacking in recognizable names, even for WSOF, but did not disappoint with some smashing finishes and exciting fights. Justin Gaethje destroyed Luis Palamino in the main event, landing a vicious one-punch dropper and following up with some brutal strikes on the ground for another consecutive win over Palamino.

Elsewhere on the card there was controversy though, as undefeated (16-0) Dagestani prospect Vagab Vagabov fought Brian Grinnell in a middleweight affair. The bout in it’s entirety was pretty straight forward, Vagabov dominated but the controversy began at the end of the match. Half way through round two Grinnell was in trouble, eating big knees and punches against the fence in turtle position.

The referee stepped in to stop the fight, but Vagabov continued his assault. Check it out, courtesy of Caposa on Twitter:

Not good for Vagabov, who has been known for this sort of stuff in the past, and definitely not for WSOF who recently had some very negative media at their last event. Rousimar Palhares was stripped of the title after gouging Jake Shields’ eyes and holding the fight finishing Kimura too long.

In fairness, the referee in the Vagabov contest could’ve done a lot more to shield the defeated fighter after calling the bout off, but that’s not taking the responsibility off of Vagabov at all. He is certainly a talent with his undefeated record, but Vagab Vagabov will need to clean up his act if he wants to be tken seriously.