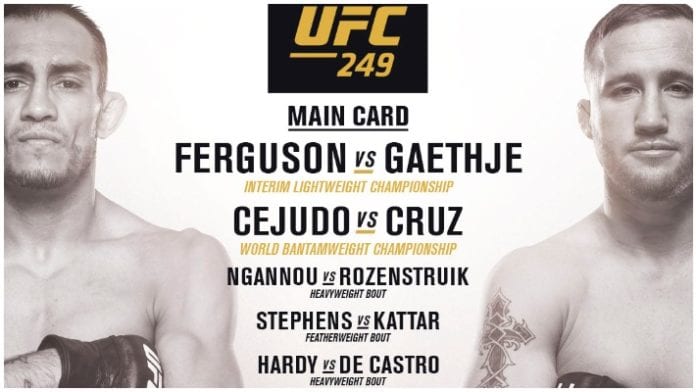 UFC 249 fight week is upon us and fans can now enjoy the countdown show which dropped on YouTube last night.

Tony Ferguson and Justin Gaethje will battle it out for the interim lightweight title in the main event at UFC 249. The event will take place on May 9, behind closed doors at the VyStars Veterans Memorial Arena in Jacksonville, Florida. The pair were originally scheduled to face off on April 18 before Disney and ESPN bosses asked UFC president Dana White to shut down the show amid government pressure to do so.

In the co-main event bantamweight champion, Henry Cejudo will put his title on the line against former 135lb king Dominick Cruz. ‘The Dominator’ is fighting for the first time in almost four years. He last fought to a unanimous decision defeat against Cody Garbrandt at UFC 207. Check out the full UFC 249 countdown show below…

Which UFC 249 fight are you most looking forward to?