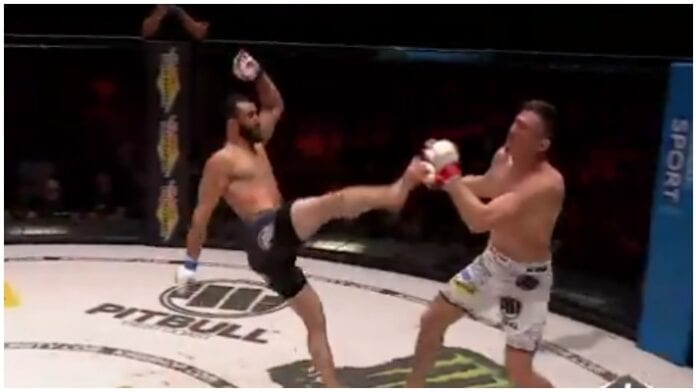 MMA Fans all over the world were blessed with several knockout of the year contenders last night. Joaquin Buckley is rightly getting tons of attention for his spectacular spinning back kick knockout of  Impa Kasanganay at UFC Fight Island 5, but he faces some stiff competition for KO of the night from Mamed Khalidov.

In the KSW 55 main event, Khalidov fought Scott Askham for the middleweight title. The 40-year-old veteran had previously lost via unanimous decision to the Englishman late last year. This time Khalidov was determined to take the fight out of the judges’ hands and did so when he landed a picture-perfect jumping switch kick inside one minute. Askham went crashing to the canvas. Khalidov landed some follow-up strikes but they really weren’t necessary – check out the knockout below…

The referee stepped in to wave off the fight after just 36 seconds. Khalidov can be seen ecstatically celebrating reclaiming the 185lb title he first captured in 2015. His win is even better considering the fact Askham, who has UFC experience, had never been finished in his professional career and was riding a five-fight win streak into the bout.

Do you think Mamed Khalidov could win knockout of the year?