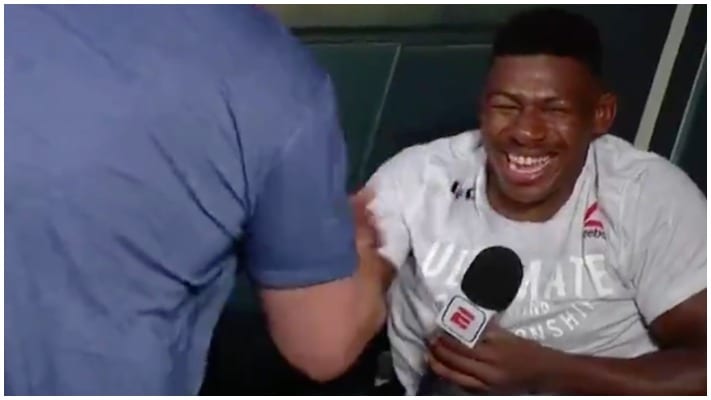 UFC middleweight Joaquin Buckley stole the show on ‘Fight Island’ this past weekend. Unless you’ve been living under a rock you will have already seen Buckley scored one of the greatest MMA knockouts of all time against Impa Kasanganay on the UFC Fight Island 5 undercard.

“So I always talk about, when you’re on a card, right, ‘How do you stand out?’… Everybody’s saying ‘just give him $200,000 tonight. Give him every bonus!’ Nobody’s ever seen anything like that. Sean Shelby texted me and said, ‘Write him a check right now for 50 grand and go give it to him before he gets out of the octagon.’” (Transcribed by MMA Fighting)

Buckley was clearly excited to be speaking with his boss, he had quite the reaction to meeting White – check it out below.

Do you think Joaquin Buckley scored the best KO ever at UFC Fight Island 5?