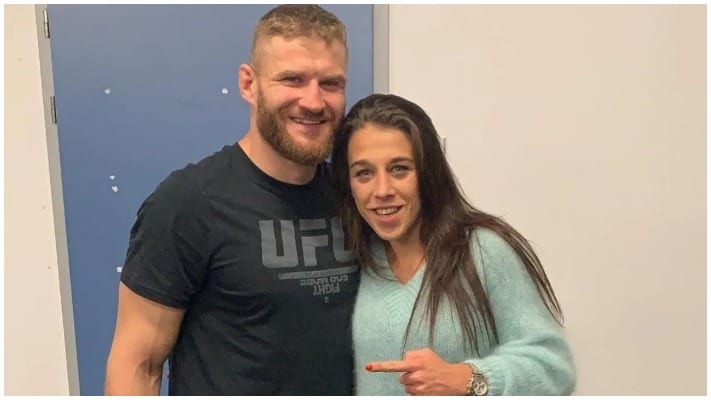 Blachowicz scored an upset win in the UFC 253 co-main event last night. The 37-year-old made quick work of Dominick Reyes, knocking his opponent out inside two rounds to claim the 205lb title recently made vacant by heavyweight bound former champ Jon Jones.

The Cieszyn, Poland native has reached the pinnacle of the sport after a tough 13-year career that has seen him compete on 35 different occasions. Blachowicz is currently riding a four-fight winning run after beating Luke Rockhold, ‘Jacare’ Souza, and Corey Anderson to earn his title shot. He also holds several other high-profile wins over the likes of Jimi Manuwa, Nikita Krylov, and Jared Cannonier. During his rise to the top Blachowicz has suffered eight defeats, He most recently lost to Thiago Santos who very well could be next in line at light-heavyweight if he gets by Glover Teixeira later this year.

Former strawweight queen Jedrzejczyk was quick to revel in having a new Polish UFC champion. The fan favourite took to social media posting the below video which shows her reacting to Blachowicz’s sublime win at UFC 253.

Jedrzejczyk last competed in March where she went to war with Weili Zhang for 25 minutes for the women’s strawweight title. After a fight many considered to be the greatest in women’s mixed martial arts history, it was Zhang who retained her title following a razor-thin split decision victory.

Jedrzejczyk notably took a lot of damage in the fight including a huge hematoma on her forehead. It was also her second failed attempt at regaining the title as well as her third overall since losing the strawweight strap to Rose Namajunas in 2017.