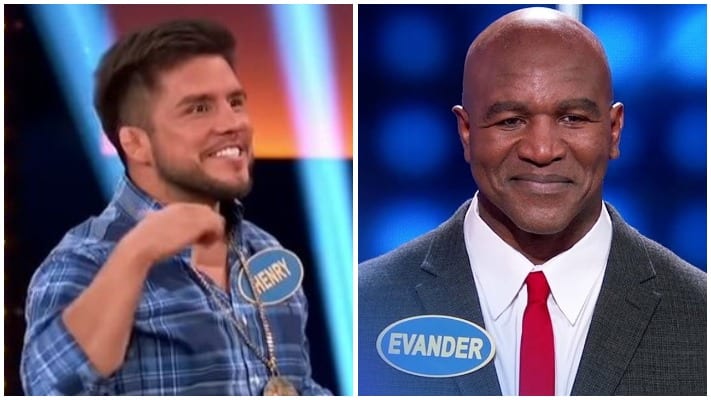 The former flyweight and bantamweight UFC champion Henry Cejudo appeared to bite off a lot more than he could chew when squaring off against heavyweight boxing legend Evander Holyfield on the latest episode of Family Feud.

Cejudo stepped up for his round of questions opposite Holyfield. As he approached the podium the Olympic gold medallist made a menacing gesture towards his opponent.

“Intimidation, Intimidation. I am trying to intimidate the legend,” Cejudo told host Steve Harvey while Holyfield looked on in bemusement.

Cejudo retired from MMA earlier this year after successfully defending his 135lb strap against bantamweight great Dominick Cruz at UFC 249. Despite walking away from the sport ‘Triple C’ has continued to pursue a fight with featherweight champion Alexander Volkanovski who seems set to face Brian Ortega in the coming months.

Holyfield retired from boxing almost a decade ago. Earlier this year he announced he would be making a stunning comeback at 57 years old. ‘The Real Deal’ will be taking part in some exhibition bouts for charity. His comeback lined up with Mike Tyson’s – however ‘Iron’ opted to face off against Roy Jones Jr. on November 28 instead.

What do you make of Henry Cejudo trying to intimidate Evander Holyfield?