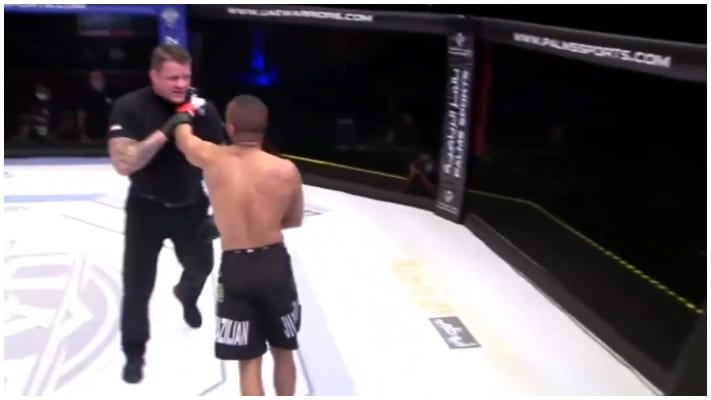 Earlier today at UAE Warriors 12, referee Marc Goddard was forced to disqualify a featherweight fighter for not only holding onto a submission too long, but also for creating an altercation immediately afterward. He wouldn’t let go of his submission when Goddard stopped the fight, he just held onto it. Then when he did let go, he got up and shoved Goddard, creating an altercation with himself and the referee.

This isn’t something you can do, all sports make it very clear to all athletes, do not touch the referee, under any circumstance whatsoever. It’s a wonder whether he’ll be able to fight again, UAE Warriors most likely won’t have him back to say the least.

The video shows Ahmad Al Darmaki in a grappling transition with opponent Bogdan Kirilenko, who was attempting to escape the mount. In attempting his escape, he gave up his back, also giving up the rear-naked choke. Darmaki proceeded to choke his opponent, and the rest is on video for you to see.

Ahmad Al Darmaki lost his first four fights, and this was his third win in his last four, before he decided to give the referee a hard time in stopping the fight. Ahmad Al Darmaki fell to 2-6 as a professional mixed martial arts fighter earlier today, rather than climbing to 3-5 like he should have. It’s unfortunate to see things like this, but they do happen sometimes.

Do you you think Marc Goddard was right to disqualify this fighter?