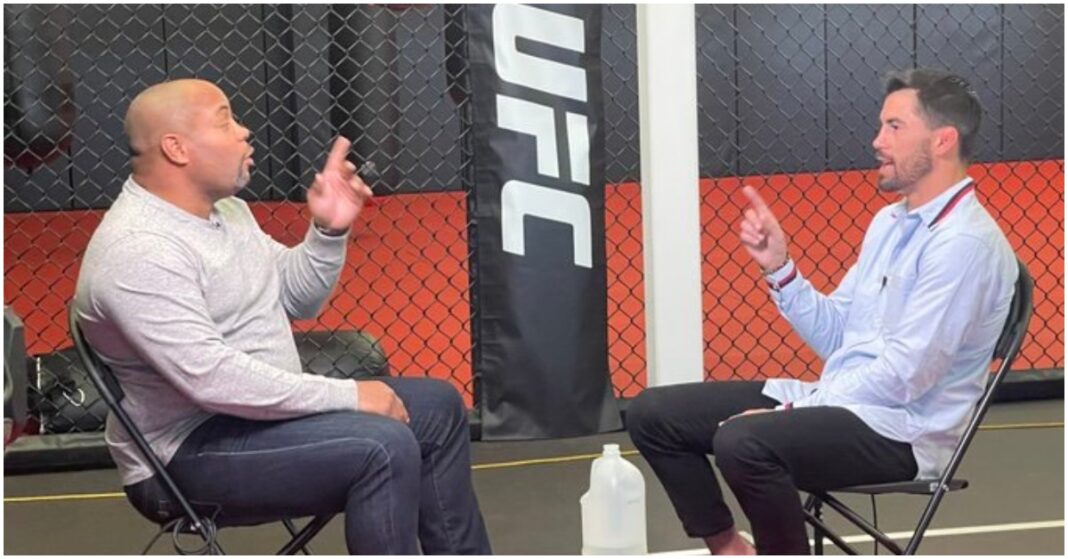 Former bantamweight king, Cruz, has recently come under some criticism after revealing he ‘usually mutes’ Cormier when he is commentating. Cruz, who takes on Pedro Munhoz this weekend at UFC 269 was taking part in media day when he took aim at Cormier.

“When it comes to DC, I usually mute it,” Cruz said. “I love DC, he’s my friend, but to me, from my experience, he doesn’t do the homework. He wants to get in and out, get the job done, make his money. And I think he cares about us, but it’s just different. He doesn’t do the preparation from my experience. He might now. I’m hoping he watches some film this time on my fight so he knows what I’m doing and why I’m doing it. But I’m not gonna hold my breath on that, that’s for sure.”

In the latest episode of Cormier’s YouTube series ‘The DC Check In’, he sat down with Cruz and they quickly got into it.

“I’ve never said anything.” Cruz Said, “I did not say anything that you wouldn’t want me to say in public. I held you accountable. It’s different. Accountability is love.”

“No it isn’t,” Daniel Cormier replied. “It’s only love in your mind Dominick.

“Accountability is love,” Dominick Cruz explained. “Listen if you hold your kid accountable for missing something, is it love? Do you do it because you love them?”

“But what are you holding me accountable for?” Cormier questioned.

“But Dominick there’s different ways to prepare for a fight than watching film, its not singular

“It’s not part of it?” Cruz quickly replied.

“Do you watch film?” Questioned Cruz.

“I will openly sit here and say I do not watch fights to the extent that Dominick Cruz watches.”

“And that’s okay. Do you watch it at all though?” Asked Cruz

“I do watch film every single time, every fighter I watch,” cormier responded

“What of my fights have you watched preparing?” Cruz asked.

“Okay so that’s different, you didn’t go back and watch the film though. You called it,” responded Cruz

“But Cruz, before those fights I watched prior fights,” Cormier replied, “I watched winning fights, I watched losing fights I watch all the fights. You know where this idea comes from though? And this is why this is great, you and I because when you say stuff like ‘DC you don’t watch fights’ I don’t bother to combat it so then you take it as fact because I don’t say ‘well no I do Dominick’ because I feel no need to really tell you why or how I prepare for my fights.”

“Can tell you something right now, as a friend?” Cormier would go on to ask. “It was wrong of you to say what you said this morning because that was not fair of you as a colleague to do that publicly.”

What do you think? Did Dominick Cruz’s comments about Daniel Cormier cross the line?