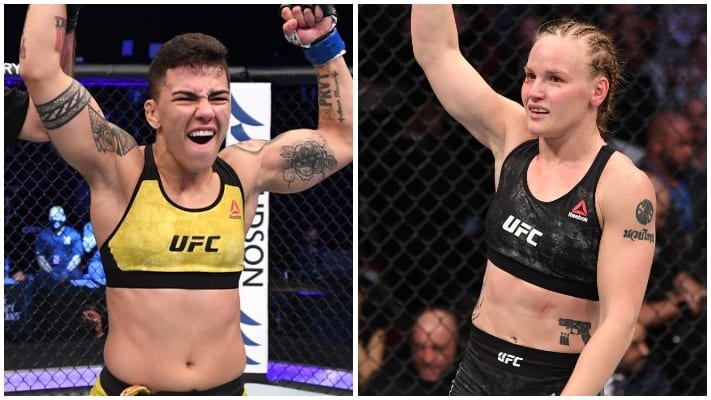 Valentina Shevchenko vs. Jessica Andrade is the first title bout of the evening at UFC 261. ‘Bullet’ will look to make the fifth defence of her flyweight title against the former strawweight queen. Who’ll win? Let’s see who the LowKickMMA staff are backing.

Jordan Ellis: I truly believe this is the toughest test of Valentina’s flyweight title reign. Jessica Andrade is the best of the rest at 125lbs and has the power to cause problems at UFC 261. I’m not backing her to win though. I expect Shevchenko to look better than ever against this higher level of opposition. Ultimately, I think she’ll walk Andrade onto a perfect shot and secure a highlight-reel KO win.

Alex Lough: Back when we did our predictions for Shevchenko vs Maia, I said the only way someone would beat Valentina is by being an expert in one area and somehow catching her with that. And, you guys? Andrade is an expert at punching people really hard. On top of that, if you look back at her second fight against Rose, she showed a whole new level of understanding when it came to footwork and head movement. Look, I know she lost that fight, but she limited the amount of damage Namajunas was able to do and had completely taken over by the end of the 3rd. If that was a 5 round fight, Rose wasn’t making it out of the 4th. I truly think the Andrade that showed up that night can beat anyone in the division. At worst, Jessica will be the toughest challenge Shevchenko has faced since winning her belt. Facing her first real step up in competition in the past 2 1/2 years could catch Shevchenko off guard. I know it’s going to take a career best performance for her to get it done, but it’s a level of performance we’ve seen her reach before. The UFC better get Al Michaels on the call. Andrade by decision or late (T)KO.

Frank Bonada: Valentina Shevchenko is one of the most dominant champions in modern MMA. Whilst Jessica Andrade brings a level of power and tenacity that Shevchenko has not faced since her last fight with Nunes, I still don’t see the belt changing hands. Shevchenko’s versatility will likely be too much for Andrade. Either a late KO or a unanimous decision victory for “Bullet”

Ross Markey: I’ve always maintained that the most difficult test for Valentina Shevchenko to overcome during her flyweight reign, would come from a division lower in the form of former strawweight champion, Jessica Andrade. The Brazilian’s aggression could be an interesting factor in this clash with the striking-oriented Valentina, but when it comes to overall technique, Shevchenko is leaps and bounds ahead of Andrade, and is arguably the most technical strikers amongst her peers at this moment. While I believe Andrade has the ability to make this one quite interesting and pose some dangerous moments herself — Shevchenko is just far too technical and shrewd to allow herself to pocket fight — a possible scenario where Andrade could really score some damage. Shevchenko to take home another successful defence via decision.