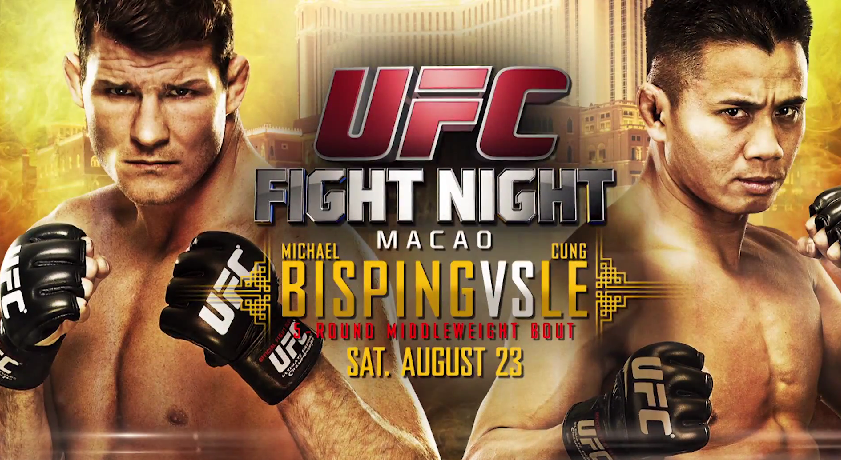 The UFC’s third trip to China is in in the bag.

UFC Fight Night 48 took place inside the Cotai Arena in Macao, China. The headliner featured an important middleweight battle between TUF 3 winner Michael Bisping and former Strikeforce champion Cung Le which turned out be be a back-and-forth war.

The first round was fairly even with both men scoring on the feet, Bisping seemed to have found his range towards the end of the round while utilising his footwork to avoid the strikes of Le. The second was a clear-cut round for “The Count” who hurt his opponent with a big shot early before busting him up with a frenzy of strikes on the feet.

Le looked down and out coming into the third but he dug in deep to keep going which payed off as he hurt the Brit with some hard kicks to the body. However, Bisping kept coming forward with a variety of attacks and his output proved to be to much for the former Strikeforce champion to deal with.

Then came the fight ending moment in the fourth round, as Bisping poured it on before landing a crisp knee on Le to send him to the mat. A few more shots from the 36-year old secured the finish.

The co-main event was short and sweet as “The Chosen One” Tyron Woodley got himself back in the win column in dramatic fashion, taking out South Korea’s Dong Hyun Kim with a vicious first round TKO. Both men came out swinging but it was Woodley who landed the cleaner shots.

The “Stun Gun” attempted a spinning back fist but it was countered with a overhand right which sent him to the canvas. A few follow up shots by Woodley and the fight was waived off.

In other action, The Ultimate Fighter (TUF) China featherweight winner Zhang Lipeng picked up his second win inside the Octagon with a fairly one-sided decision over UFC newcomer Brendan O’Reilly. The win was Lipeng’s first since he beat Wang Sai to win TUF: China.

Kicking off the main card was the delayed welterweight finale from TUF China between Ning Gyangyou and Yang Jianping which turned out to be a pretty stale contest. The fight was fairly close going into the third round but neither man seem interested in bringing it to his opponent. In the end the judges had the final say and they ruled it in favour of Gyangyou.

In the preliminary bouts, Milana Dudieva picked up her first win inside the Octagon by handing Elizabeth Phillips her second straight loss. Royston Wee managed to stay unbeaten in the UFC after the judges gave him a split-decision win over Yao Zhikui in a horrendous call.

American Top Team’s Colby Covington put an exclamation mark on his UFC debut by demolishing Wang Anying en route to a first round stoppage. Japanese prospect Yuta Sasaki picked up arguably the most impressive win in the prelims with his first round submission over Roland Delorme.

Alberto Mina extended his undefeated record to 11-0 after battering Shinsho Anzai to take a first round TKO. The fight topped the preliminary card with both men going toe-to-toe right from the bell. Finally, TUF China finalist Wang Sai picked up his first win inside the Octagon taking a unanimous decision over “The Cheesecake Assassin”, Danny Mitchell.