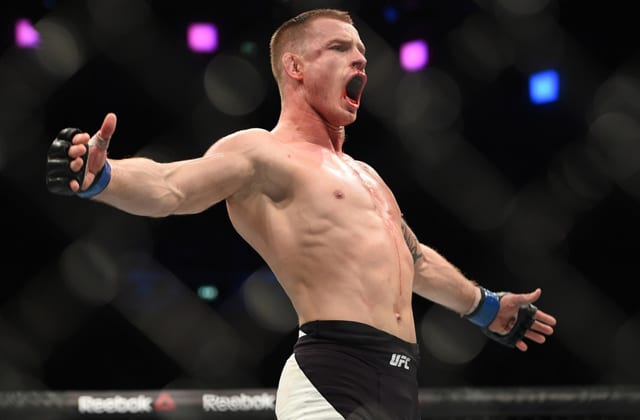 UFC St. Petersburg will kick off the main card with a middleweight match up between Krzysztof Jotko and Alen Amedovski.

Jotko (19-4) likely needs a victory to keep his spot on the roster. After starting his UFC career winning six out of seven fights, the 29-year-old has dropped his last three straight. As for Amedovski (8-0). The Macedonian born fighter currently calls Italy home. He has competed all over the world, most recently getting his hand raised twice under the Bellator banner.

Both men take to the center of the Octagon. Jotko is physically larger than Amedovski by appearance. Jotko throws a high kick to start but Amedovski blocks it. Jotko winds up again with a kick but misses completely. Amedovski looks like he has some early jitters, he counters Jotko with a left hand. He presses forward as Jotko circles away. He lands a right on Jotko as Jotko dives for a leg. He gets Amedovski’s body and lands a takedown. He works his way through Amedovski’s guard and drops some elbows. Amedovski kicks Jotko off and gets back to his feet. He lands a spinning elbow on Jotko. Jotko goes to a knee momentarily. Jotko looks for another takedown and gets it. He slows the pace a bit in side control as he lands some ground and pound. 30 seconds left in the round and Jotko is in total control in half guard. The round ends.

The fighters touch gloves to start the round. Jotko throws a front kick and presses forward. 45 seconds gone in the second round and the fighters have a much slower cadence than the first. Jotko throws a head kick and follows it with a double leg takedown. He ends up in side control and lands some punches to Amedovski’s head. He grinds his forearm into the Macedonian’s head. Jotko drives his elbow into Amedovski’s dome now. He moves into the crucifix position for a second, however, Amedovski popped his arm out with a quickness. 90 seconds left in the second stanza. Jotko drives his weight on to Amedovski’s upper body and pins his arm. He lands some nasty elbows that open up Amedovski. He pounds his face with several punches and elbows. The horn sounds.

Amedovski pumps his jab to start the final round. Jotko throws a left and as Amedovski commands the center of the Octagon. Jotko is dancing on the outside, landing a left hand. Amedovski needs to do something. Jotko shoots a double from far and lands it. He postures up in Amedovski’s guard and lands. Amedovski kicks his legs up looking for a submission presumably. Jotko lands some more ground and pound and presses Amedovski into the cage. He moves into side control and continues the onslaught of ground and pound.