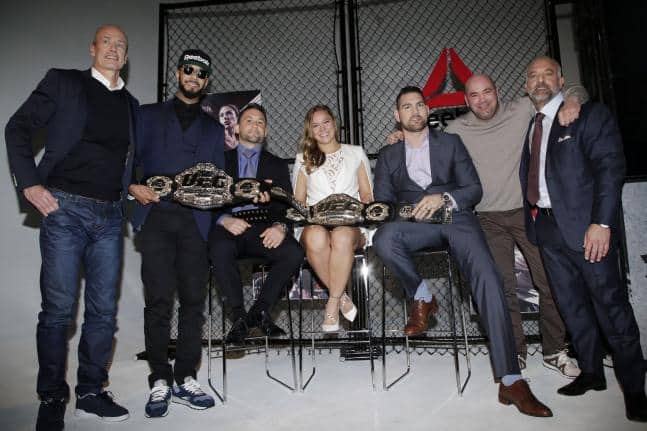 Following a large amount of fighter backlash for the previously declared Reebok sponsorship fighter pay system based on ranking, the UFC decided to unveil a new system last week based on fight tenure with the promotion.

And today (Wed., May 6, 2015) the figures of just what the fighters will make have been released. Bantamweight Cody Gibson tweeted out a photo of the figures only moments ago:

The figures were confirmed to MMAFighting.com by vice president of operations Dave Sholler, and an email was sent to fighters detailing the new payment system. Here’s an excerpt from the correspondence:

“The above outlined compensation structure will result in UFC distributing the vast majority of the revenue generated through the AOP directly to the athletes. We continue to believe the introduction of the official outfitting kits for our athletes is a beneficial investment, which will elevate and create long-term value for you, the UFC brand and the sport.”

But it’s hard to decipher if the athletes themselves will agree with that statement overall. The deal, which is worth a reported $70 million and will go into effect during International Fight Week starting July 7, forces fighters to wear only a predetermined kit during any and all fight-related activities.

Fighters will not be able to gain any extra revenue from outside sponsors during that time, although they will gain extra income from sales of kits bearing their likeness. Yet that may not be enough to compensate for their loss of other sponsorship deals, as the numbers don’t appear to be all that jaw dropping for fighters.

Title challengers will make $30,000 for their title fights and current champions will bring in $40,000.

The numbers would suggest that the previous free-for-all in terms of sponsors made way more money for the fighters, and there’s certain to be another type of backlash for these released numbers. What are your thoughts on the new system?