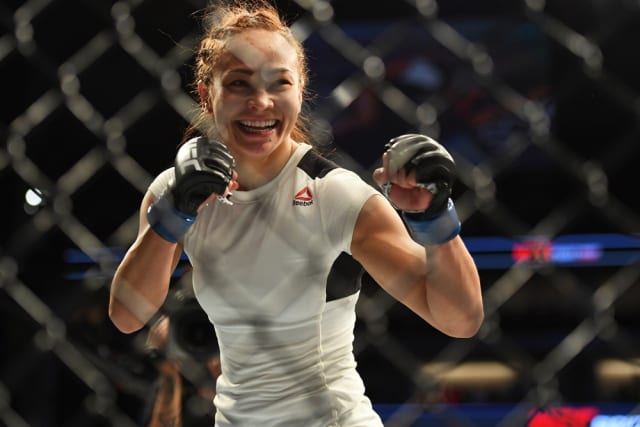 Waterson (16-6) has won her last two fights inside the Octagon with her most recent victory coming over Felice Herrig at UFC 229. A win on Saturday night (March 30, 2019) could propel “The Karate Hottie” into title contention. As for Kowalkiewicz (12-3). She had her two-fight winning streak snapped in her last outing against Jéssica Andrade at UFC 228. Kowalkiewicz will try to avoid the second losing streak of her career.

Waterson quickly takes the center then Kowalkiewicz takes the position over. Waterson lands a leg kick, then another. Waterson throws a one-two. Kowalkiewicz throws a sidekick and a jab. Waterson flicks a side head kick out there. Kowalkiewicz lands a right hand. The American finds a home for her jab again. Fat start for Waterson. She throws a variety of kicks but Kowalkiewicz walks straight through. The Polish fighter tags Waterson with a flurry of punches. She presses Waterson into the cage and lands some knees. Waterson spins out and breaks free. She throws a spinning attack but misses everything. The round ends.

Waterson pumps her jab to start the second round. Kowalkiewicz lands a right hand. She moves forward and throws a head kick. Waterson uses a sidekick targeting the knee of Kowalkiewicz. The Polish fighter lands another hard right hand. Waterson answers with a leg kick as she circles to her right. She throws Kowalkiewicz on her head and moves into side control. She is doing a good job at not rushing into anything as she is taking her time. Waterson lands some ground and pound and then looks for angles to exploit. Kowalkiewicz is trying to kick her legs up to create a scramble. Waterson is doing a great job controlling the position with less than one minute in the round. She continues to grind on the Polish fighter. She jumps on an arm and extends. It looks like it is in but Kowalkiewicz will have none. The round ends.