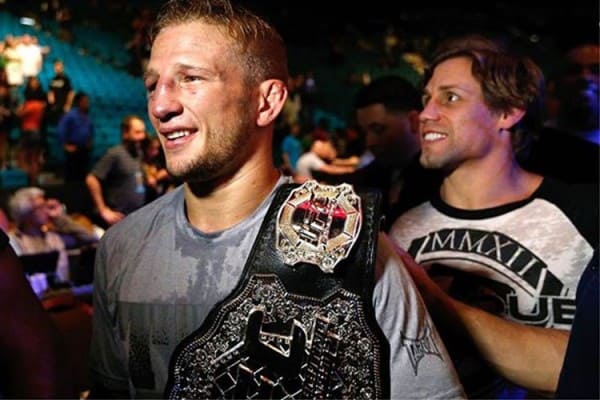 In this rematch that’s been a (very) long time coming, I fully expect a different fight than the one-sided affair we witnessed at UFC 173. Barao has had much more time to prepare, and he’s reportedly changed up his diet in an effort to avoid the weight cutting issue that forced him out of their original rematch at UFC 177. He should show up re-focused and ready to get his belt back; however, I’m not sure that will be enough to stop the surging Dillashaw. After seeing his unheard of 30-fight unbeaten streak disappear in their first fight, he looked noticeably apprehensive in his follow-up win over the lower ranked Mitch Gagnon, and that simply won’t get him the win over ‘The Viper’ here. The only way Barao leaves Chicago with the belt is if the old version of him shows up and fights smart. I don’t think it will happen, as Dillashaw’s unparalleled movement should rule the day once again. Dillashaw by unanimous decision.

TJ Dillashaw shocked the world at UFC 173 by smashing Renan Barao, but he had one big advantage playing on his side in that bout; the unpredictability factor. No one, including the formerly dominant Brazilian bantamweight boss, saw it coming. This time around Barao has had plenty of time to analyze the striking and footwork of ‘The Viper’, but is that enough to beat him in the rematch? In my opinion this will be a lot closer than the first time these two danced, but I just don’t know if Barao has the chops required to get his belt back. It’s going to be an all out war, but I’m picking TJ Dillashaw to take a razor-tight decision over Barao after five rounds of slobber-knocking action.

I think this rematch may be a little bit closer than the first fight, but I don’t see the outcome being any different. Renan Barao took a beating in the first fight against Dillashaw, and although he may have underestimated “Killashaw”, I truly believe the current champ is the real deal. “The Baron” has phenomenal Muay Thai skills and deadly kicks, but I don’t think he’ll have an answer for the champion’s exquisite footwork and movement, tricky angles, and crisp combos. The Brazilian may have a chance for a submission if the fight ends up on the mat, but I see Dillashaw picking Barao apart on the feet and retaining his title. Dillashaw by fourth round TKO.

Top-ranked prospect Jessica Eye has been skyrocketed into potential title contention if she can get past Tate in this pivotal co-main event tomorrow night, but after wins over Sarah Kaufman and Leslie Smith and a split decision loss to Alexis Davis, I believe that is just a product of there not being anyone else to take on dominant champ Ronda Rousey. Tate has put together a nice win streak of her own and could get a third shot at ‘Rowdy’ if she gets by ‘Evil’ tomorrow. I think that will happen, as I expect ‘Cupcake’ to use her top-level wrestling game to neutralize Eye’s boxing by taking her to the mat and keeping her there with a steady stream of ground and pound. Eye is a solid women’s bantamweight no doubt; I just believe Tate will show she’s a cut above the rest of the 135-pound ladies aside from Rousey. My pick is Tate by unanimous decision.

Miesha Tate is the female equivalent of Urijah Faber; always in the fray of title fights, but never quite getting to the pinnacle of the division. The returning Jessica ‘Evil’ Eye will look to make it two in a row after demolishing Leslie Smith’s ear at UFC 180, and I expect a very gritty, hard-hitting fight between these two feisty WMMA stars. ‘Cupcake’ is three wins clear of her last loss, and arguably could find her way to a title shot with a win on Saturday. I see that Eye is stepping up in competition against Tate, and I don’t think that it will be a good night for the Ohio native. I’m picking Tate for a decision win here, all day.

This is an interesting fight, as it is a battle between a rising contender in Jessica Eye and a veteran mainstay in Miesha Tate. “Evil” has looked strong as of late, and probably holds the striking advantage here, which “Cupcake” will have to watch out for. However, Tate may be the bigger female, and without a doubt holds the wrestling advantage. I think wrestling and experience will play a factor in this fight, so I see Tate grinding out a victory. Tate by unanimous decision.