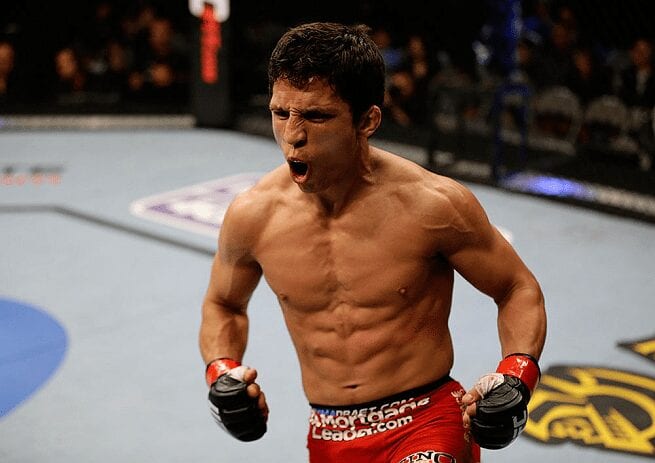 Joseph Benavidez and Dustin Ortiz will collide in a flyweight rematch that is five years in the making.

Benavidez, who already holds a victory over the division’s champ, will look to so his position as the No. 1 contender with a win over Ortiz. He is coming off of a win over Alex Perez last November.

As for Ortiz, he is riding an impressive three fight win streak. He defeated Matheus Nicolau at UFC on FOX 30 in his last outing.

Ortiz takes center octagon in round two. Ortiz closes the distance but Ortiz locks in a front headlock and uses it to control position. The fighters separate and take a breather. Ortiz lands a body kick as Benavidez takes a deep breath. Ortiz closes with an uppercut. He is starting to find his range. Benavidez changes levels and tries to get the fight back down to the ground. The fight slows a bit as Benavidez tries to drag Ortiz to the canvas. Ortiz does a great job at defending as he looks to get Benavidez to the ground. Ortiz backs up and lands a hard right hand and slams Benavidez to the ground. He sinks in his hooks and looks for the rear naked choke but the bell sounds.

The third and final round starts with Ortiz pumping his jab. Benavidez responds with a leg kick. Ortiz fires off a right hand but Benavidez shoots a double and locks his hands around Ortiz’ waste. Ortiz and Benavidez roll in a scramble as Benavidez ends up on top with his hands around Ortiz’ waste again. He locks in a body triangle and looks for the RNC. Ortiz is doing a good job hand fighting thus far. Benavidez is holding on for dear life as Ortiz is doing all he can to get free from this body lock. 90 seconds left in the fight. Ortiz gets back to his feet but Benavidez ends up winning another scramble. The fight ends with both men scrambling.