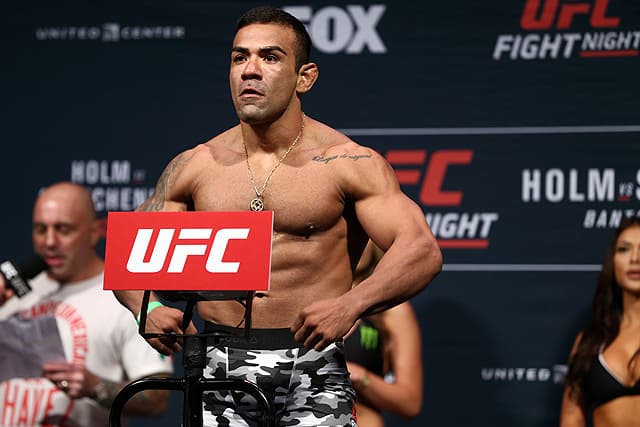 Michel Prazeres will likely fight for the last time at lightweight tomorrow.

Prazeres tipped the scales at 161 pounds for his fight with Desmond Green on Saturday night’s UFC card in Belem, Brazil.

The commission says Prazeres will have to compete at welterweight going forward, which Prazeres himself agreed with while speaking to the press following Friday’s weigh-ins  (via MMA Fighting):

“I had already talked to my team about it during this weight cut. My body is feeling the weight cuts, and I’d rather fight at welterweight and take care of my health and put on a better fight for the fans because sometimes I don’t perform as I could in the fights.

”It was an issue in pretty much all of my fights. I’ll be stronger at welterweight. I’m short, but I can surprise with other things.”

Prazeres, who’s notched an impressive five-fight win streak, will go toe-to-toe with Greene, who’s coming off of a loss to Rustam Khabilov in September. However, Prazeres remains adamant that he has plenty to gain from beating his opponent:

“Every fighter that wants to get to the belt has to fight someone from the top, but Desmond Green is a great fighter,”Coming off a loss or not, he’s a dangerous test for me. If you look at his record, he’s a tough fighter and I respect him a lot, but I’m going there to stop him.

”He has a good boxing, a good cardio. He’s tough,” Prazeres continued. “But I think my game kills his. My striking is better than his, and if I take him down it will be complicated for him. Wherever he makes a mistake, I’ll finish the fight.”

The new rule states a fighter can’t cut more than 10 percent of their natural body weight, which will inevitably force many fighters to move up a weight class. Friday’s missed weight is one of several, each time missing by three pounds or more.

With Prazeres being one of those fighters, how would he do at welterweight? Prezeres actually debuted in the UFC as a welterweight in a losing effort to Paulo Thiago back in 2013.