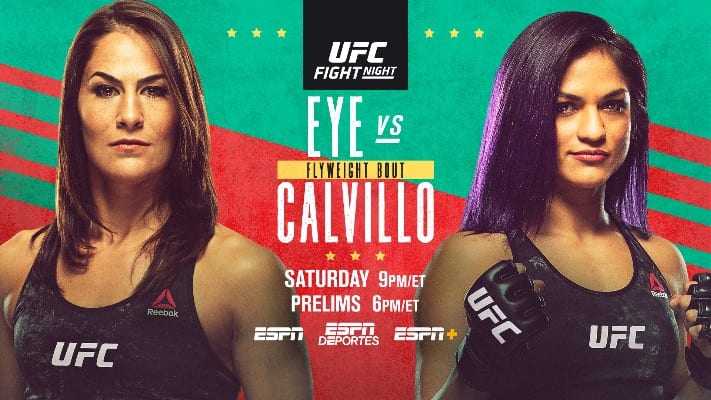 The facility hosted the main event bout between #1 women’s flyweight contender Jessica Eye and #10 ranked women’s strawweight fighter Cynthia Calvillo. The matchup went the full five-round distance with Calvillo coming out on top due to her superior grappling ability and durability on the feet. What was a very back and forth striking match quickly became a one-sided grappling performance with Calvillo securing take-downs in three of the five rounds. Outside of the main event, there were plenty of moments warranting bonuses on the card.

The First Performance of the Night came in the opening bout of the evening. The welterweight matchup between Christian Aguilera and Anthony Ivy ended with Aguilera finishing Ivy via TKO in only 59 seconds. The fight took place entirely on the feet for the short duration with Aguilera catching Ivy and eventually getting the finish.

The Second Performance of the Night came in the following fight, only the second fight of the evening. Tyson Nam got back into the win column by finishing Zarrukh Adashev in 32 seconds. The highly praised kick boxer Adashev entered the octagon to face a game Nam, Nam was aggressive early finding a home for his right hand only 32 seconds in.

The Third Performance of the Night bonus came in the opening fight of the main card. This saw Women’s Flyweight Mariya Agapova make her UFC debut against seasoned UFC fighter Hannah Cifers. Agapova put on a dominant performance piecing Cifers up on the feet before taking the back in the clinch and finally securing her rear-naked choke finish.

The Final Performance of the Night bonus came in the co-main event of the evening between Marvin Vettori and Karl Roberson. The matchup that was originally scheduled for May saw the two finally settle the beef inside the octagon. The two engaged in striking trade for the large duration of the round before Vettori decided to make it a grappling match. Roberson did a great job at scrambling and getting a better position, however, Vettori’s non-stop pressure eventually warranted him finding a rear-naked choke 4:17 into the first round.