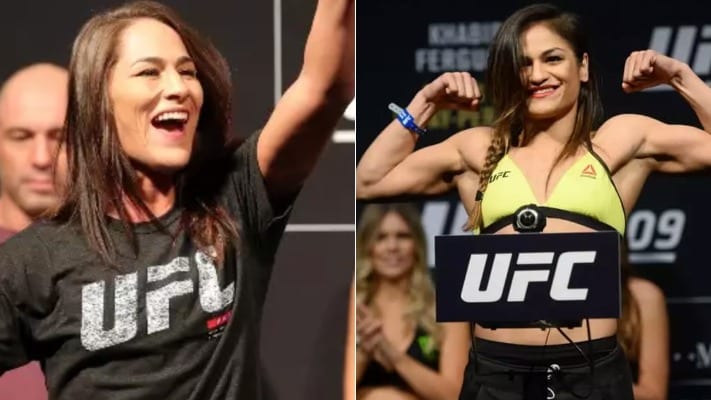 IT’S TIME! Top flyweight contender Jessica Eye takes on Cynthia Calvillo who fights at 125lbs for the first time. Eye is looking to make it two wins in a row after her highlight-reel knockout loss to Valentina Shevchenko. Calvillo is unbeaten in three fights and will want to continue her good form tonight.

Round 1: Cynthia Calvillo lands the first punch of the fight and it knocks back the head of Jessica Eye. The Mexican swings hard but misses a two-punch combo. Eye slips in a nice uppercut. These two ladies are getting after it early. Lot’s of volume without a lot of clean punches landed. Calvillo lands a high kick but Eye is unfazed, catches her opponents foot before letting it go. Half way through round one. Eye lands back to back right hands. Calvillo fires off a nice combo. Calvillo lands another clean head kick but Eye just eats it again and grabs the leg before realizing she can’t really do much with it. Calvillo is landing shots and coming with lots of volume. Eye on the other hand is more selective with her punches but still scoring. Right up to the bell the two woman are swinging big – a great start to our main event.

Round 2: Calvillo starts the round well scoring with back to back left hands. Eye appears to land a beautiful uppercut. Calvillo shoots in for her first takedown of the fight. Eye defends and fires off a knee but it doesn’t bother Calvillo who completes the takedown. Calvillo is controlling her opponent against the fence. Eye gets back to her feet but almost gives up her back. Calvillo is trying to take the back and manages to get it eventually – she’s got both hooks in right now. Eye is trying to shake off her opponent who adjusts well to maintain this dominant position. Calvillo switches to the body triangle to cement her top position. She is firing off ground and pound. This is a huge round two for Calvillo but Eye survives.

Round 3: Really even start to round three. Both fighters are getting off with a variety of shots. Calvillo lands clean, makes her opponent miss then fires more shots in – beautiful stuff. She rushes forward with a stance switch to land again. Eye lands big. Calvillo returns. She’s really busy and jumping in with a high volume of shots. Eye is trying to catch her on the way in and does. ‘Evil’ scores with a big right hand but Calvillo immediately shoots in to score a takedown. She’s working hard to take the back. She gets it but doesn’t have much time to work before the round ends.

Round 4: Into the championship rounds we go… Eye a little more urgent after a telling off from her corner. She attempts a kick and Calvillo grabs her leg and gets the takedown. She has so much time to work and quickly takes the back. Lot’s of little shots to try open up Eye for a choke attempt. Eye does very well to scramble back to her feet with two minutes left on the clock. Calvillo shoots in for a takedown and Eye stuffs it. She’s now going in search of her opponent. Calvillo is slowing down after a lot of good work. Eye lands a big right hand. Calvillo is still staying busy and lands a lovely one-two. She seems to have got her breath back now and lands a few more shots as the round ends.

Round 5: Both fighters going after it at the start of round five. Calvillo, as she has for much of the fight, is getting the better of the striking, she’s able to land and make her opponent miss. Again! She lands a beautiful one-two that knocks back the head of Eye. Calvillo is starting to look very comfortable – she lands a big step in elbow. The Eye corner tells her to step on the gas and she does. A flurry of strikes land but she probably needs a finish at this point. Eye just misses on a right cross and eats a spinning back fist for her efforts. Eye lands a big right hand. Another one grazes the face of Calvillo who shoots secures a takedown with one minute left. She works for a choke, momentarily winds up on the bottom before getting back to her feet. They continue to swing to the final buzzer. A brilliant flyweight debut for Cynthia Calvillo who should get the judge’s decision.