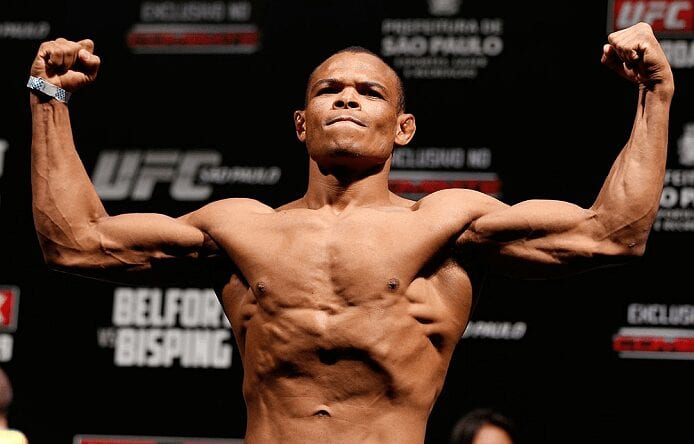 Lightweight prospect “Stormin'” Norman Parke met up with decorated kickboxing vet Francisco Trinaldo on the main card of tonight’s (May 30, 2015) UFC Fight Night 67 from the Goiania Arena in Goiania, Brazil.

The fight kicked off with a bit of a feeling out process until ‘Massaranduba’ landed a hard low kick followed by another. He pawed his jab at Parke, using it to set up another low kick and looping overhand left. Parke countered with an overhand left of his own as he finally opened up with some combinations. Trinaldo landed to the body, ate a counter, and fired back with a good combination of his own. Parke scored a quick takedown to smother Trinaldo on the ground, lifting him up and taking his back before flooring him again with a judo trip. The Brazilian landed a few elbows in the clinch and a decent knee followed by some punches to end the back-and-forth first round.

In the second Trinaldo threw a big overhand that missed. He did find a home for a hard body shot, following up with a low kick before Parke looked to clinch. Trinaldo landed some knees there, breaking to snap a hard left hand. Parke snapped a knee but ‘Massaranduba’ kneed him back and got right back up when Parke dragged him down briefly. Trinaldo found his timing on the feet with elbows and knees, stalking him down with punches and kicks. Leg kicks thudded Parke’s lead thigh, reddening it as he missed on another takedown attempt at the bell.

Trinaldo threw a head kick to begin the final frame, landing more damaging body shots. Parke finally got another takedown to take Trinaldo’s back again. He sought the rear-naked choke, flattening Trinaldo but unable to lock the hold on. “Stormin'” nearly got it, but Trinaldo turned the tables to get back up. Parke quickly secured another takedown, however, ending the close fight on top with some punches.