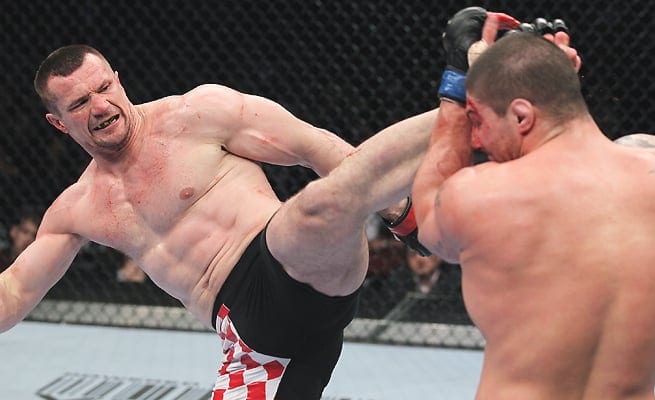 After a largely boring card save for a few select finishes at the UFC’s Polish debut of UFC Fight Night 64 from Krakow today (Sat., April 11, 2015), Pride FC legend Mirko “Cro Cop” Filipovic saved the day with a bit of sweet revenge.

After losing by way of a now-infamous head kick from Gabriel Gonzaga at UFC 70 in 2007 that was replayed about forty million times in the fight buildup this week, Cro Cop was well on his way to losing his re-debut against the smothering Brazilian jiu-jitsu black belt.

But when the hulking “Napao” slowed down in the third round, Cro Cop took full advantage. Wobbling his nemesis with a hard short right elbow along the cage, Filipovic followed him to the ground to open up the floodgates of an endless barrage of vicious elbows that scored him what will go down as one of his most emphatic victories (and he’s had a lot).

It was an exciting and nostalgic comeback that will keep Cro Cop in the UFC for the time being. The same can’t necessarily be said for Gonzaga, but at least he picked up a $50,000 “Fight of the Night” bonus for his efforts.

Check out the highlights of Cro Cop’s insane comeback stoppage from his post-fight interview below: