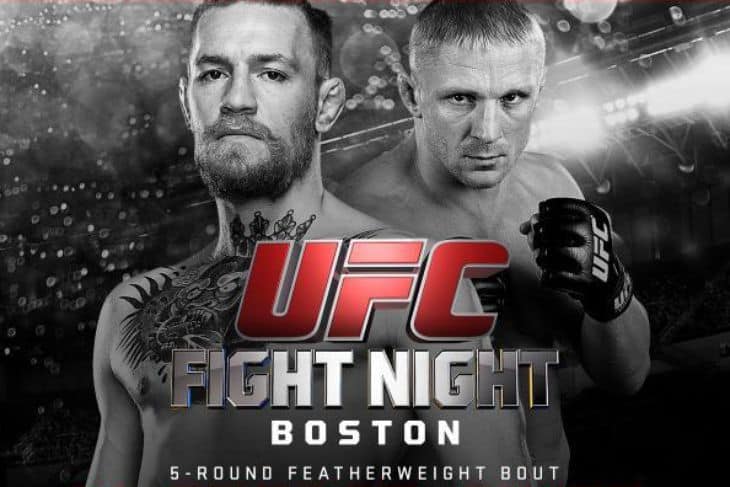 The event is of course headlined by the pivotal featherweight throwdown between Irish superstar Conor McGregor and his German counterpart Dennis Siver, a bout that will earn “Notorious” a huge title fight against Jose Aldo later on this year. The electric fight began with “Notorious” winging spinning kicks. McGregor hit a bouncing Siver with some sharp punches and a knee, taunting him with a clap. The Irishman landed some big straight shots and kicks, clearly hurting Siver. “Notorious” ended the one-sided opening round with a flurry.

McGregor continued to pepper Siver with straight lefts in the second, dropping him with a huge shot to swarm on the ground. McGregor landed elbows from the full mount and Herb Dean stepped in to stop the fight.

In the co-main event, surging No. 3-ranked lightweight Donald “Cowboy” Cerrone will incredibly fight for the second time in just over two weeks when he faces former champion Benson Henderson in a trilogy-sealing grudge match going back to their WEC days. The opening round saw Cerrone push the pace and pepper Henderson with some solid punches and body kicks, and “Smooth” landed some decent kicks of his own. Henderson stayed out of Cerrone’s range in the second, scoring with kicks until “Cowboy” hit him with a left hook and secured a takedown.

In the third, Cerrone landed a left and a high kick followed by a combo. Henderson countered with a big high kick and a solid knee to the body. “Cowboy” notched his second takedown but “Smooth” immediately got back to his feet. The fighters traded powerful kicks and Cerrone landed a hard shot to end the bout. Ultimately “Cowboy” took home a unanimous decision.

Ultra-dangerous striker Uriah Hall took on (very) late replacement Ron Stallings after both Costa Philippou and Louis Taylor dropped out. Hall came out with a big flying knee, yet Stallings found success with his low kicks. It was short-lived, however, as Hall nailed Stallings with a huge right hand and swarmed with ground shots, causing the cage side doctor to call off the fight via injury TKO.

The main card will be kicked off by a lightweight affair between Norman Parke and Gleison Tibau. The longtime vet landed some solid shots on the Irishman in the first, and followed up with some grinding takedowns in the second. Aside from some stiff strikes in the third, Parke could never get much going, and Tibau rode excellent takedown defense to a split decision win.