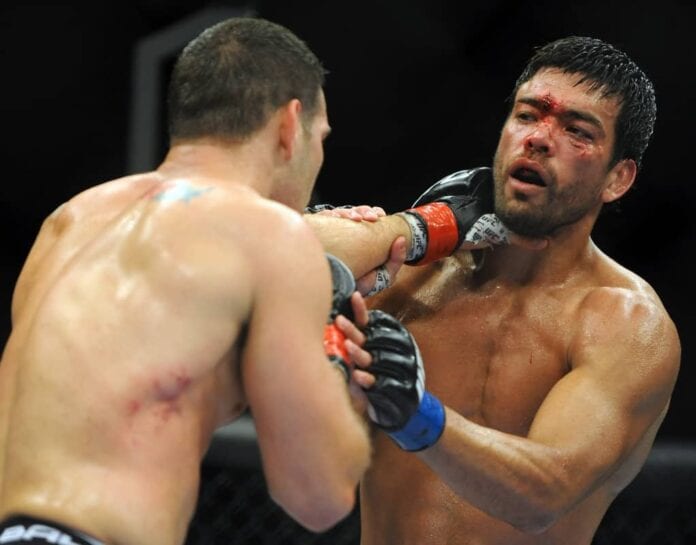 Machida has looked nothing short of impressive since cutting down to middleweight, and while he lost a title bid to Chris Weidman at July’s UFC 175, he gave him all he could handle in the later rounds. I think Machida’s success here will depend on his willingness to pick up the aggression early on; that strategy could obviously get him into some bad spots against a wrestler like Dollaway. “The dragon” could probably pick his way to a decision victory, and that could be what he does, but we’ve also seen him on the wrong wend of the judges’ scorecards using that style. Dollaway has cut down all five of his last opponents; his UFC 166 split decision “loss” to Tim Boetsch was a farce. I think the Power MMA product saw Weidman’s gameplan to beat Machida, and his pressure-heavy wrestling style may just be enough to stifle Machida’s elite stand-up skills. That’s why I’m picking “The Doberman” to score an upset via unanimous decision.

Lyoto Machida matches up pretty well with CB Dollaway in my opinion, with his back foot style against “The Doberman’s” wrestling pedigree and striking prowess. There aren’t many fights with Machida involved that are dominant wins for the karate master. He either eeks by his opponents or knocks them out in victory. I expect the latter in this fight, as he is still a force and especially at 185 pounds. Having gone five rounds with Chris Weidman at UFC 175, “The Dragon” will have learned a valuable lesson. Expect to see a more aggressive Machida, as he puts a nasty knockout on Dollaway in round two.

In the main event, former light heavyweight champion Lyoto “The Dragon” Machida looks to bounce back following his title loss to Chris Weidman at UFC 175 against No. 10-ranked C.B Dollaway. Machida is known for his unorthodox karate style where he uses exquisite timing and quickness to land lethal counterstrikes. Dollaway, on the other hand is more of a wrestler, and has actually improved his striking quite a bit. “The Doberman” is a tough test, but in my opinion, Machida is just on another level. I think “The Dragon” will be able to use his quickness to avoid the takedown and ultimately outclass Dollaway on the feet. Machida by third round TKO.

It’s been a long and strange year for Barao, one that began with him near the top of the pound-for-pound conversation after his TKO win over Urijah Faber at UFC 169 and ended with him relegated to fighting No. 14-ranked Gagnon following his failed bid to make weight in his championship rematch against TJ Dillashaw at UFC 177. While it’s been a shockingly fast fall from grace from Barao, this should be where he gets back on track. Gagnon is a good grappler, but “The Baron” looks motivated to get back to a title fight. Barao wins via TKO in the first.

Let’s be realistic for a second here; Mitch Gagnon could very well be a really great fighter one day, but he is on the wrong side of a squash match against Renan Barao in UFC Fight Night 58’s co-main event. Much more talented, athletic and proven in the Octagon, I expect “ The Baron” to make a statement against the young Canadian. Gagnon has said in the past that he will submit the ex-kingpin; I’d honestly be surprised if he even records a takedown. Upsets are great and all, but don’t expect to see one here. Watch out for a first round TKO by the former champion Barao.

Coming off a troubled seven months where he lost his title in a five-round starching from TJ Dillashaw and weight cutting issues that forced him out of the rematch at UFC 177, Renan Barao will look to get back on track against Mitch Gagnon. The Canadian Gagnon is currently ranked No. 14 in the division and this is the chance of a lifetime for him. I don’t have too much to say about this fight, because I believe it is a squash match in every sense of the term. Barao is the better fighter in every area by leaps and bounds and I think he will completely outclass the lesser-known Gagnon. Barao by first round TKO.