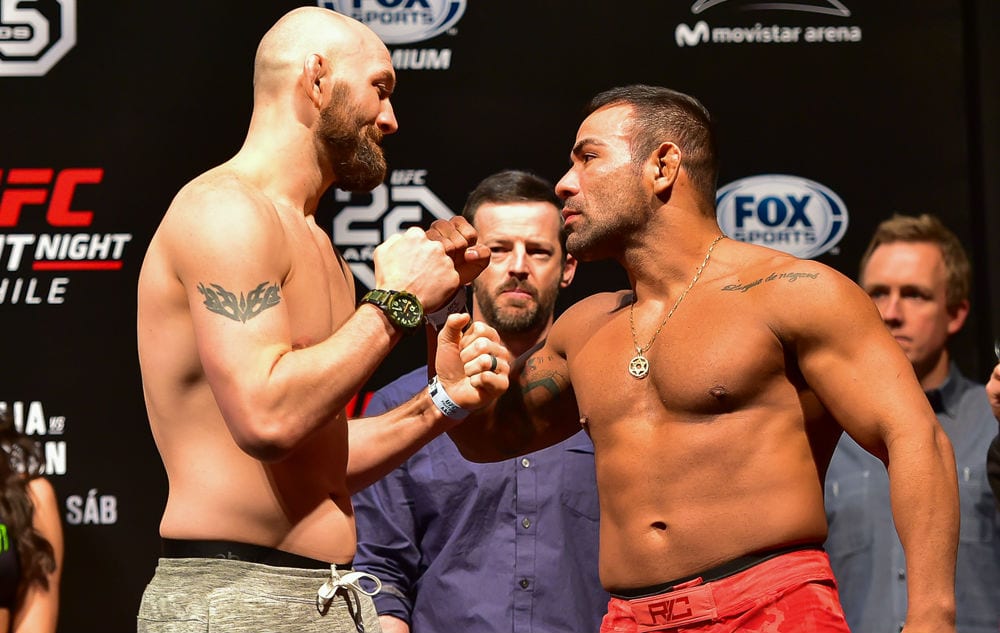 It’s once again fight day here at LowKickMMA, and the talent on display tonight (Saturday, May 19, 2018) will come from in the form of UFC Chile. Headlining the card are Kamaru Usman and Demian Maia, but there’s a whole bunch of great fights also taking place on the preliminary section of the card.

Michel Prazeres vs. Zak Cummings in a welterweight bout closes the preliminary card on FOX Sports 2. In round 1, Prazeres getting nothing done on top so ref stands them up. Cummings comes forward with a high kick but Prazeres slips the left hand. Cummings pulls back and lands a 3-2 then an inside leg kick. Prazeres returns the favor. Prazeres winging his right and landing on the chest/shoulder. Cummings bleeding from a cut from a head butt. Prazeres making use of his speed adv to get in, land, and get out. In round 2, Prazeres sends a kick glancing off Cummings’ chin. He shoots but Cummings stuffs it but Prazeres clings to him. He dumps his and jumps on the back. Cummings fights off the back-take and gets inside position on the cage. He lands a couple knees then swings power hooks on the break that get Prazeres’ attention. Cummings shoves Prazeres into the cage again and knees. They break and swing but miss. Cummings body kicks. Prazeres slowing down some. Prazeres hits a couple leg kicks and misses on fastball overhand. Cummings pushes forward and lands a left but Prazeres swings back. Cummings has a hard head kick blocked. Cummings ties up and pushes Prazeres into the cage again, working knees. He tries a trip but Prazeres gets away with a fence grab. Short punches. In round 3, Big body kick then a front kick for Cummings. He comes forward with a left hook to the body, Prazeres glances two shots off his head. Cummings front kick answered by Prazeres right hook. Left lands for Cummings, Prazeres lands another right then a leg kick. Cummings has another head kick blocked. Right hook lands for Cummings but Prazeres finds a home for his too. Another Cummings head kick. 1-2 for Cummings, winging left answers for Prazeres. Big body kick and knee land for Cummings but Prazeres hits a takedown. Cummings tries lacing up a kimura, settles for preventing Prazeres from landing anything. The judges gave the win to Prazeres.

Alexandre Pantoja vs. Brandon Moreno is next in a flyweight bout. In round 1, Pantoja comes out pressuring and he pushes Moreno back with a flurry of punches. Moreno with low leg kick. Pantoja putting hands on Moreno then a big knee. Pantoja is tagging Moreno with his right hand again and again, also landing big knees. Body kick, left hook for Pantoja. Moreno misses a leg kick but uses his momentum to spin into a backfist that lands. A flush Pantoja jab hurts and backs up Moreno. Moreno is off-balanced in an exchange and Pantoja gets on top in half guard. Moreno tries to scramble and eats some bombs and then Pantoja teleports to his back. In round 2, Moreno trying to pot-shot and then exit quickly. Pantoja leg kicks. Pantoja still leg kicking. Pace has slowed a bit but now they swing. Pantoja goes body-head and Moreno gives it back. Pantoja wobbles Moreno but the Mexican won’t quit. In round 3, Pantoja kicks the leg, body, and then a front kick to Moreno’s face. More measured pace this round. Pantoja body kick and Moreno clinches up. Moreno hits an elbow on the break and Pantoja swings back. Moreno catches a kick and takes Pantoja down but gets kicked off right away. They bang in the pocket, they both land left hooks but Pantoja lands another right. Moreno catches a high kick and dumps Pantoja but has to scramble away instantly as they land in an awkward position. They box and swing hammers. Pantoja got the decision win.

Poliana Botelho vs. Syuri Kondo is next in a women’s strawweight bout. In round 1, Botelho pressures and they trade leg kicks but a body kick and a right to the body folds up Kondo. Ground and pound follows and that’s it.

Gabriel Benitez vs. Humberto Bandenay in a featherweight opens the FOX Sports 2 preliminary bouts. In round 1, Benitez drops Bandenay and goes to follow up but has to fight out of an armbar. He picks Bandenay up and slams him then a vicious punch puts him out cold.

Enrique Barzola vs. Brandon Davis in a featherweight bout finishes off the UFC Fight Pass preliminary card. In round 1, A Barzola leg kick off-balances Davis and the Peruvian jumps on his back. Davis is up right away but Barzola is clinging to him. Knees and a brief kick-out takedown. Barzola keeping up the knees and takedowns. He picks up and slams Davis, who immediately works to the cage to wall-walk while fighting off a back-take. They separate and Davis goes after him with leg kicks. Barzola leg kicks and Davis returns fire with right hands. They trade leg kicks and rights. Barzola is able to create space and get up and they throw hands to the bell. In round 2, Barzola ducks under a lead uppercut to tie up and get a rear waistlock. He picks Davis up and dumps him but Davis right up. Barzola feeds Davis a trio of rights on the cage before tying up and taking him down again. Davis up but now Barzola picks him and carries him to the center before planting him. Barzola in half guard, now has a wrestling ride. Barzola sits under for a guillotine, can’t get it. Davis escapes to his feet but Barzola latches onto him again, another big takedown. Barzola gets the back again, falls off the top again but gets the position again once more before the rd ends. Not a ton of damage but possible 10-8. Davis got nothing going. In round 3, Davis hits a body shot but Barzola lands a 3-2. All kickboxing for first half of this rd. Davis starts letting his hands go a bit more and Barzola ducks under for easy takedown. Davis wall-walks up again but Barzola controls him and knees. Davis separates and hits a knee. Davis shoots but runs into a front headlock and winds up on bottom. Barzola got the decision win.

Henry Briones vs. Frankie Saenz is next in a bantamweight bout. In round 1, Briones is looking for an uppercut. Saenz goes left hook to the body, overhand upstairs and follows it into a shot that’s stuffed. Saenz body kick answered by Briones right hand. Briones starts to have some success with leg kicks but Saenz shoots and pushes Briones into the fence, picks him up bodily and dumps him. Hard elbows. Briones fights to his feet and eats a knee to the bread basket. Saenz again goes hard to the body then overhand upstairs, catching Briones w/ both. Trading leg kicks now. Saenz tries that same combo and this time Briones has a check hook waiting. Saenz is rushing through space with punches and Briones starts to get his timing and counters. In round 2, Briones is picking up where he left off, countering Saenz’s rushes well. Saenz lands a right and just avoids a huge uppercut. Briones runs into a big right that puts him on his butt. Briones clinches momentarily then they go back to exchanging punches. Saenz ducks under a flurry with an easy reactive shot. Briones works up and fights off a back-take. Saenz goes to the body then goes with a right uppercut a moment later that looked like that same body shot at first. Check left hook for Saenz, nice counter right hook for Briones. They trade low kicks, Saenz shoots but gets stuffed. He lands a knee and an elbow in the clinch. They tie up again, knees for Saenz, uppercuts for Briones. In round 3, Briones lands a counter 2-piece then a leg kick. Saenz rushes into the clinch and pulls Briones into a knee. Saenz shoots in and has to fight out of a tight guillotine. Saenz has Briones in a cradle and is completely smothering him. Briones tries rolling under for a kneebar but Saenz blocks it. Wrestling ride for Saenz and right hands now. Saenz is wearing on Briones against the cage, knees him hard a couple times as he works up. He gets another takedown a moment later, gonna ride out the clock. The judges gave the win to Saenz.