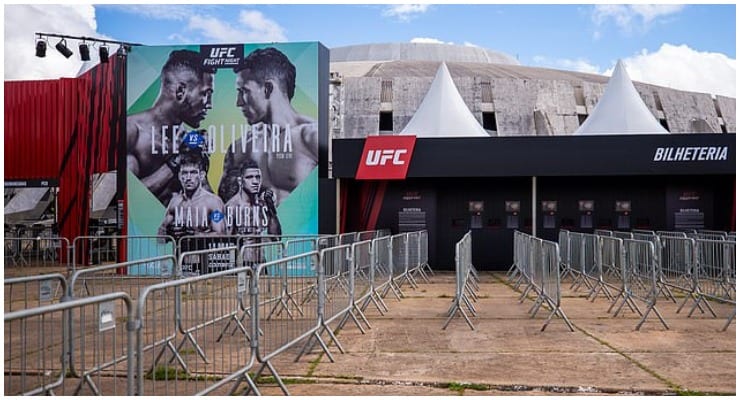 UFC fighters are not being tested for Corona Virus ahead of tonight’s card in Brasilia, Brazil.

This shocking news was revealed by Cristiano Sampaio who is the Chief Operating Officer for the Brazilian MMA commission otherwise known as CABMMA.

In a statement to MMA Fighting, Sampaio revealed fighters have not undergone testing but had been closely monitored for any symptoms, he said.

“What we did was follow teams and athletes closely, alongside the UFC, for possible symptoms, and so far no one has presented any. There was no suspicion even at the weigh-ins, where fighters would be more weaken with the weight cut. The incubation period goes from five to 14 days, which could still result in a negative test. We’re taking every measure possible under the current scenario.”

UFC Brasilia will continue with no fans or media at the Nilson Nelson Gymnasium. This comes after the governor banned all mass gathering of more than 100 people amid an outbreak of Corona Virus in the city.

In the main event Kevin Lee will meet Charles Oliveira in a now catchweight bout of 158.5lbs after ‘Motown Phenom’ came in 2.5lbs over the lightweight limit.

The Fight Night event features 24 athletes from 11 different countries and is pretty much the only major sporting event taking place this weekend. All other sports leagues including NBA, NHL and Premier League have all postponed events until the pandemic is under control.

Should the UFC be testing its athletes for Corona Virus?