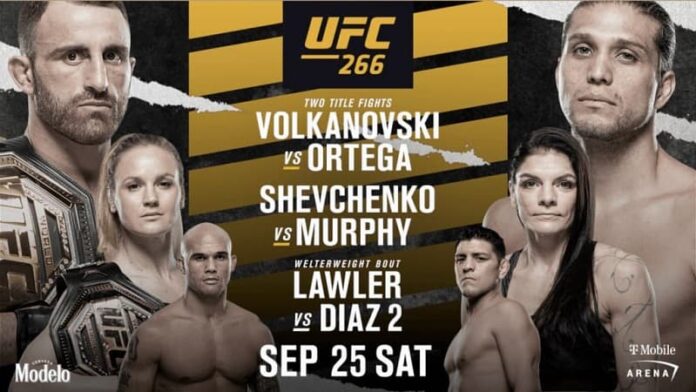 After a few less than bumper cards, the UFC is finally back to its brilliant best on September 25.

UFC 266 boasts two title fights and the return of one of MMA’s biggest icons.

In the main event of the evening, Alexander Volkanovski will aim to make a second successful defence of his featherweight title. Brian Ortega is the man tasked with stopping the streaking Aussie, in his second shot at 145lb gold.

Before that, Valentina Shevchenko puts her flyweight title on the line against Lauren Murphy. ‘Bullet’ has proved to be one of the most dominant champions in all combat sports. ‘Lucky’ will need to live up to her nickname if she hopes to emerge from UFC 266 with the title.

Away from the title fights, we have a five-round bout between two of the biggest legends in welterweight history. Nick Diaz returns from his five-year layoff for a highly anticipated rematch with Robbie Lawler. The Stockton, California native knocked out ‘Ruthless’ when they first fought 17 years ago.

Join LowKickMMA as we preview, predict, and hopefully win some money betting on the UFC 266 main card.

If you can’t wait until 25 September to bet check out the greatest non uk based online casino for all the best games.

The UFC featherweight champion is the favourite heading into UFC 266 and deservedly so. Volkanovski is currently riding a win streak that stretches all the way back to 2013. The 32-year-old even has a couple of wins over Max Holloway, who beat the snot out of Brian Ortega back in 2018. So, we’ll be backing Alexander Volkanovski to retain his title at odds of -185. He’s just such a tricky customer with so many tools in his arsenal. ‘T-City’ looked good against ‘The Korean Zombie’ but could be slightly outgunned over five rounds later this month. However, he certainly can’t be totally overlooked, especially at +140.

Valentina Shevchenko is a monumental favourite heading into another title defence. The flyweight champion has looked simply unstoppable since dropping down to 125lbs and the fact she’s priced as low as -1400 with some bookmakers is totally fair. Lauren Murphy has put together a nice win streak over good opposition but is somewhat fortunate to be in this position after getting a somewhat controversial decision win over Joanne Calderwood last time out. We would only suggest betting on Murphy at +800 if you really enjoy losing money. We’ll be betting on Shevchenko and if you are too you’re going to have the pick the round and method of victory to get yourself any type of decent odds.

Nick Diaz may not have fought in five years, but the most shocking thing is he hasn’t won a fight in almost a decade. The former Strikeforce champion last pick up a win all the way back in 2011 against BJ Penn. Despite that, he enters UFC 266 only a slight +120 underdog against Robbie Lawler who has been the UFC welterweight champion and defended the strap during that time. ‘Ruthless’ has looked anything but as of late while losing four consecutive fights. However, it’s hard to look past his activity heading into this five-round fight. It may not be pretty but ultimately, we expect him to get the win and will be betting on him to do so at odds of -140.