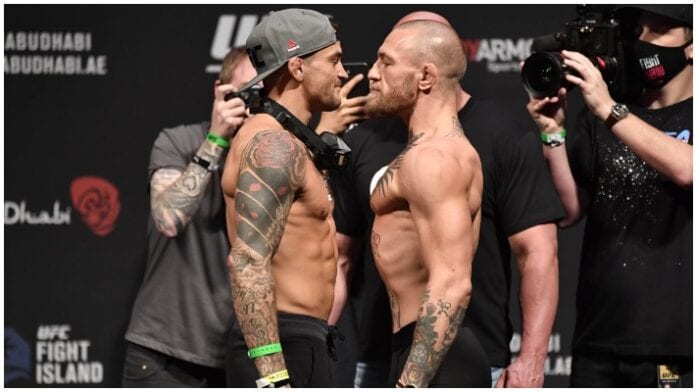 UFC 261 is set to be the first time that the UFC has fans return to the stands in America since March of 2020 and the company plans of things getting even bigger in the following events.

During the UFC 260 post-fight press conference, UFC President Dana White shared that the plan is to hold UFC 264 back in Las Vegas at the T-Mobile Arena.

After being asked by a media member, White shared that he is hopeful that will be the case and also shared that they plan for the event to be headlined with the trilogy bout between Dustin Poirier and Conor McGregor.

Years on from their initial faceoff, the two Lightweights met for a second time in January on Fight Island in Abu Dhabi. In this matchup Poirier equaled the score securing himself a TKO victory over the former two-division champion.

Following this win both athletes expressed that they were interested in a trilogy fight and the UFC also shared they were onboard.

White was also asked about number two ranked contender Justin Gaethje and where he would fit into this equation to which he shared that the former title challenger could possibly be a replacement fighter should either Poirier or McGregor be unable to make fight day.

Currently, the bout has not been officially announced and will not be for the title as the vacant belt is up for grabs in the UFC 262 main event between Charles Oliveira and Michael Chandler.

The last time that the UFC held an event at the T-Mobile Arena was the final PPV event before COVID forced the company to proceed without fans.

This event, UFC 248, provided one of the greatest fights of all time between Weili Zhang and Joana Jedrzejczyk, but also a lackluster main event fight between Israel Adesanya and Yoel Romero.

Who do you think takes victory in the trilogy?