LowKickMMA.com
Home UFC News UFC 254 Could Have Fans In Attendance 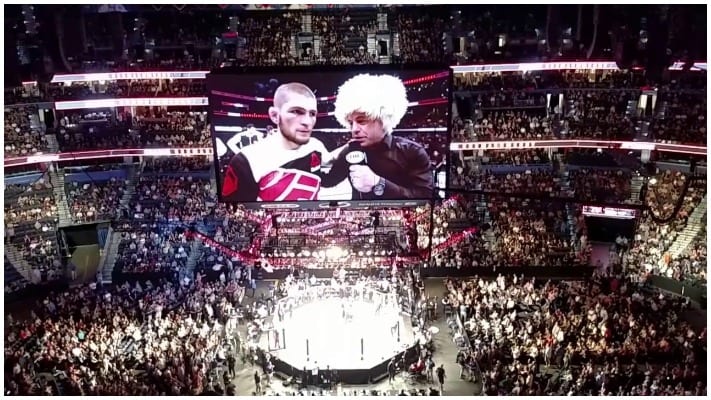 UFC 254 could have a live audience in attendance on October 24 according to the Department of Culture and Tourism (DCT) in Abu Dhabi.

The UFC is currently enjoying it’s second successful run of shows on Yas Island AKA ‘Fight Island’ in Abu Dhabi. So far, all events held by the promotion have taken place behind closed doors due to the ongoing global pandemic. However, according to DCT’s destination marketing director Saeed Rashed Al Saeed that may change when Khabib Nurmagomedov faces off against Justin Gaethje at UFC 254 later this month.

“We are currently studying how to bring fans into UFC 254,” Al Saeed told The Hotelier. “Right now we’re going through how to segregate fans from people inside the bubble but still get them inside the space in the safe manner,” he said.

“If everything goes to plan we’ll be announcing this soon. It’s not confirmed yet but the plan is in place but it needs to be endorsed. I’m optimistic but health and safety cannot be compromised. That is our priority, it will not happen unless it is fool proof.”

Al Saeed has enjoyed being apart of the UFC’s events but hopes the MMA leader’s next trip to Abu Dhabi does not need to take place inside a bubble, he said.

“When people ask me if there will be a Fight Island 3, my honest answer is ‘I really hope not.’ That’s not because I don’t enjoy the work or I don’t enjoy bringing in world-class fighters, it’s because I want future sporting or UFC events to be able to take place outside the confines of the pandemic. I’m trying to be optimistic and hope that we wouldn’t need another bubble. We can have more UFC events, but I want the guests to be able to watch them in person and I want our fighters to be able to go out and enjoy the emirate.”

Do you think it will be safe for fans to attend UFC 254?