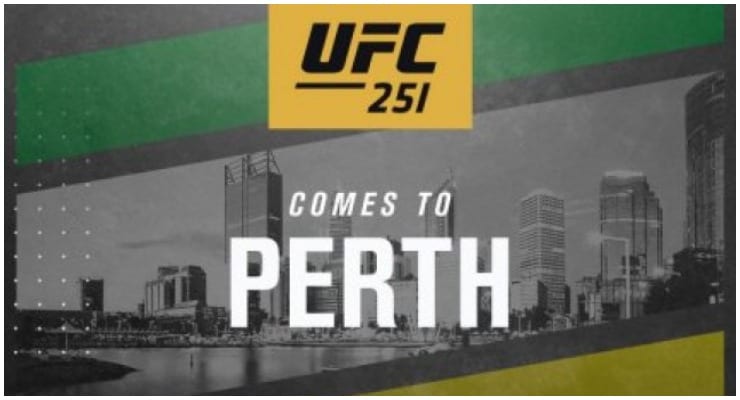 Women’s flyweight champion Valentina Shevchenko will face Joanne Calderwood on June 7 at UFC 251 in Perth Australia. The fight will likely be high up the card at the RAC arena, although no other bouts have been confirmed yet.

Last week ESPN reported the ‘Bullet’ was set to defend her title against Scottish contender Calderwood. They also confirmed UFC 251 was the targeted destination for the fight. However, until now the location of this event has remained a mystery.

Perth the western capital of Australia previously hosted UFC 221 in February 2018. The event featured Yoel Romero vs. Luke Rockhold. UFC 251 will be the city’s second ever event and President Dana White is excited to go back. Speaking in a statement on Tuesday he said.

“We are so pumped to announce our return to Perth. Perth was an amazing host city to us in 2018 and come June 2020, we’ll be back with a stacked card headlined with a championship fight. Australian fans are some of the best in the world, and we look forward to putting on another massive show for them.” (Transcribed by News.com.au)

Rumors about who else may feature on the card will now go into overdrive. Featherweight contender Alexander Volkanovski is a clear front runner to headline this event. The 31-year-old Aussie is waiting for a date for his first title defence and upon hearing the news posted on Twitter to demand his spot on the card, he said.

“UFC is coming to Perth!! As Australia’s UFC WORLD CHAMPION, it’s only fitting for me to DEFEND and KEEP that belt here in Australia. LETS make that happen!! #ufc251”

Who else should be added to UFC 251 in Perth, Australia?