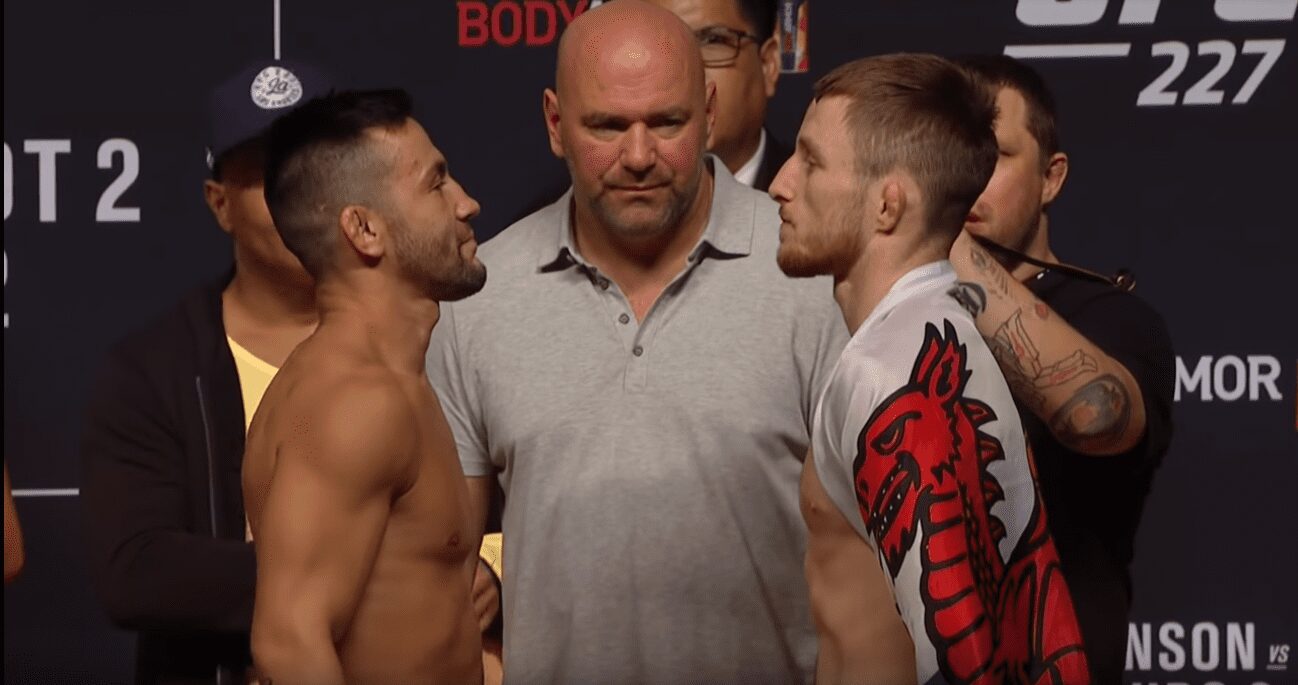 It’s once again fight day here at LowKickMMA, and the talent on display tonight (Saturday, August 4, 2018) will come from in the form of UFC 227. Headlining the card are TJ Dillashaw and Cody Garbrandt, but there’s a whole bunch of great fights also taking place on the preliminary section of the card.

Pedro Munhoz vs. Brett Johns in a bantamweight bout closes the preliminary card on FOX Sports 1 in what should be an interesting fight. In round 1, the two trade some serious leather in the center of the Octagon. Both land and take hard punches. Both men landing clean, hard punches to the head. Neither has the advantage. Johns shoots in but Munhoz stuffs him. A left to the body, right to the head for Munhoz at the horn.In round 2, after some great back-and-forth action, Munhoz goes back to the leg kicks. Johns doesn’t like them and is starting to limp. A kick to the body drops Johns. Munhoz is all over him with punches,s but the Welshman is doing a great job of covering. Munhoz rolls into the guillotine but miss sit. He tries it again but Johns explodes to his feet and presses the Brazilian into the cage. Munhoz is wrecking John’s’ leg. He is in deep trouble but they start trading bombs in the center of the cage. In round 3, Johns comes out southpaw, so Munhoz is attacking the right leg. A kick to the body hurts Johns, who crumbles. Munhoz latches on a guillotine, but he can’t sink it. Munhoz on top in half guard but not much is happening. Grice is telling them to work or get stood up. Anticlimactic finish to a wonderful brawl. Munhoz got the win.

Ricky Simon vs. Montel Jackson is next in a bantamweight bout. In round 1, Jackson lands a nice push kick to the gut but he’s taken down. Jackson springs right back up, though. Upon separating, the two size each other up. Trigg implores them for more action. Simon finally shoots in and scores another takedown. Not much action in the first but Simon’s takedowns are the difference. In round 2, Simon scores a takedown but Jackson quickly gets back up and takes his back. From there, Jackson presses Simon into the cage. Jackson is backing Simon up with punches to the head and kicks from all angles, though not many are landing cleanly. Simon closes the gap, scores a takedown and takes Jackson’s back with about 45 seconds left. In round 3, Simon scores a takedown. Jackson quickly reverses him and gets back to his feet. Jackson lands a knee to the body and two rights to the head. Simon has enough and scores a big takedown and moves right to mount. Jackson rolls over and Simon has his back, looking for a choke. Jackson is fending it off. Simon scores another takedown with 45 seconds left. Jackson needs to pull off a miracle in order to win this one

Ricardo Ramos vs. Kyung Ho Kang is next in a bantamweight bout. In round 1, Ramos opens up a flurry of punches to the head. Dang stays poised and fires back with punches of his own. Solid action at the midway point. Nice takedown by Kang with 30 seconds left but Ramos quickly spring back to this feet. Very close opening round but Ramos landed the better overall strikes. In round 2, Ramos lands a right hook to the jaw and then slams a left-right hook combo to the guts. Kang takes another before shooting in and landing the takedown. Ramos rolls to his side and latches on a kneeler. It’s deep but he loses it when he tries to switch his grips. Ramos lands a few punches to the head and then scores a takedown just before the horn. In round 3, a very nip-and-tuck round here. Neither man seems to have a sense of urgency as they feel each other out. Ramos dives in and lands a timely takedown with about a minute left, though Kang springs right back up. Ramos got the split decision win.

Matt Sayles vs. Sheymon Moraes in a featherweight bout opens the FOX Sports 1 preliminary card. In round 1, Moraes lands a decent knee to the body, the first good strike landed by either man in the first minute. Sayles eats a few right hands and then goes for the body lock. He presses Moraes into the cage, looking for a takedown. The two land some solid knees on the inside. Moraes defends another takedown late in the round after landing a few moderate punches upstairs. Not much happened in the round, other than a few decent strikes by Moraes. In round 2, Sayles blocks a pair of punches and then clinches Moraes into the cage. Moraes pokes Sayles in the eye by accident and we restart the match. Moraes is very active on his feet but Sayles is rolling with the rolling beautifully. Nothing hard has landed form either man just yet. Moraes walks into a stiff jab, but quickly regroups and tags the American with a glancing right-left. Now Sayles pokes Moraes in the eye. In round 3, Sayles lands a nie knee to the head and Moraes is shaken up a little bit. Sayles lands a left to the body. Moraes stumbles away. Sayles pouring on the pressure as Moraes is gassing out. Sayles got the decision win.

Jose Torres vs. Alex Perez in a flyweight bout finishes off the UFC Fight Pass preliminary card. In round 1, Perez comes out on fire and lands several clean punches to the head, followed by knees to the body. Perez is tearing into Torres, who looks sluggish early. Torres has some redness and swelling around his left eye. Both men are landing bombs. Torres is rocked by a combo to the head. He is in deep trouble as Perez chases after him. erez unloads a flurry of a dozen punches to the head and levels Torres. Trigg intervenes as Torres crumbles in a heap.

Danielle Taylor vs. Zhang Welli is next in a women’s strawweight bout. In round 1, Zhang starts off with a few stinging leg kicks. Taylor seems a bit tentative and is lunging with her punches. Taylor is largely on her bike as the taller Zhang is picking her apart with punches and kicks. At the midway point, Zhang scores a takedown. Taylor rolls Zhang into a heel hook but can’t finish it. Zhang explodes to her feet and regroups. Taylor rocks Zhang with a flailing right hook just before the horn. Zhang is noticeably wobbled. In round 2, Taylor is moving well but she’s not sticking. Zhang lands a hard left and then a right to the head. Taylor answers with a right hook to the head. Taylor is throwing bombs but she’s only throwing single shots, which Zhang is avoiding. Taylor lands another powerful right to the jaw just before the horn. Still, Zhang controlled most of the frame. In round 3, Zhang blasts Taylor with a few side kicks to the body and head, but Taylor shakes them off. With a minute left, Taylor needs to go for broke. They swing for the fences at the horn; nothing lands. Zhang got the decision win.

Opening the UFC Fight Pass prelims is Marlon Vera vs. Wuliji Buren in a bantamweight bout. In round 1, after a they trade some jabs, Buren just misses with a spinning hook kick. Vera peppers his foe with a few kicks to the thigh and has a high kick blocked. Nothing clean has landed upstairs yet. Buren lands a nice right hand to the face, forcing Vera to shoot in. Buren defends it and threatens with a standing guillotine but can’t sink it. After clinching against the cage for about 45 seconds, Buren scores an inside trip and takes Vera down right before the horn. In round 2, Vera scores a powerful takedown and lands in side control with a minute left. Buren powers back to his feet but Vera unloads a combo. A nasty left to the liver floors the Chinese fighter, who is agonizing on the canvas.