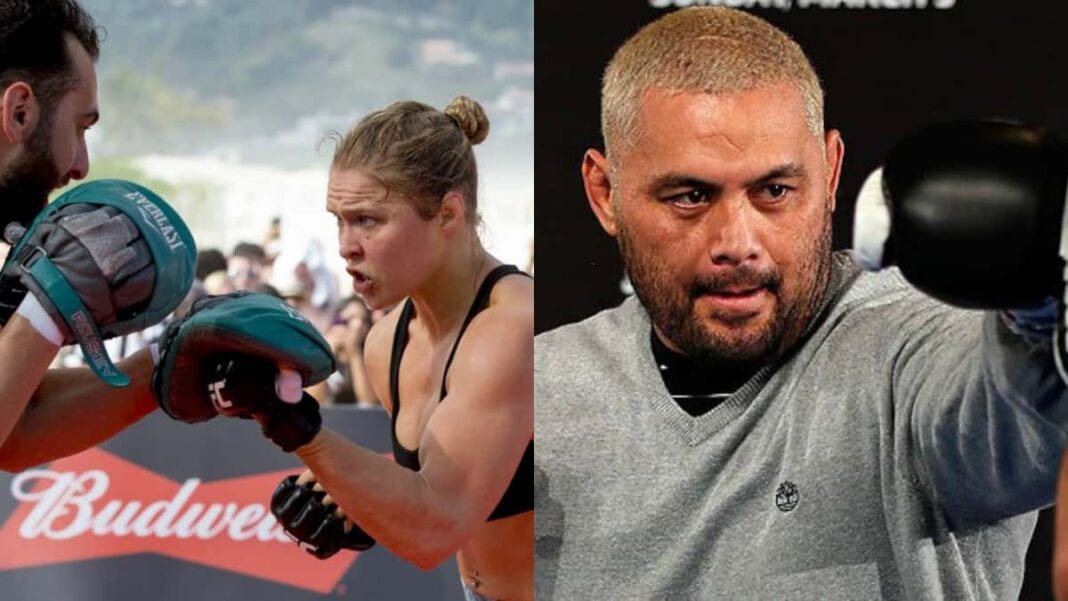 UFC 193 is just days away, as the promotion looks to light up the sunny shores of Melbourne, Australia with an action packed night of fights on Saturday November 14. Headlining the star studded card is the women’s bantamweight title fight between dominant champion Ronda Rousey and ex-boxing boss Holly Holm. The evnt takes place at the 70,000 capacity Etihad Stadium.

Always fun to watch in her open workouts, Ronda Rousey is as athletic and exciting to watch as ever as she prepares to take on ‘The Preacher’s Daughter’ this weekend. will it be another squash match with ‘Rowdy’ emerging victorious quicker than the time it takes to make a coffee? It’s quite possible and, if her form at UFC 190 is anything to go by, this fight may well stay standing.

Check out the undisputed queen of the UFC work the pads and showcase her illustrious grappling skills, courtesy of our good friends over at Submission Radio Aus, who will be providing some great coverage of the event in Melbourne, their home soil, at UFC 193.

UFC strawweight champion and ever popular star Joanna Jedrzejczyk takes on Valerie Letourneau in the evening’s co main event, as she looks to keep her unbeaten status in MMA alive against a very tough challenger.

Her striking is being called the best in the promotion, and many believe she is the 115-pound equivalent to UFC 193’s headlining champion Ronda Rousey. Letourneau is indeed stiff competition, but her record and style would make a bet against the champion unlikely at best.

The last time Mark Hunt fought in Australia it was a classic slugfest against Antonio ‘Bigfoot’ Silva, the man he rematches this weekend at UFC 193. The two put on a heavyweight battle for the ages, eventually fighting to a draw.

Both men have won just one out of three in the time since, getting finished rather brutally in both their losses. Once again taking place in Hunt’s back yard, and with his physique looking better than ever, perhaps the smart money would be placed on ‘The Super Samoan’ this weekend.

Former boxing champion and unbeaten MMA prospect Holly Holm will finally get to the foot of the mountain she’s been waiting so many months to climb. Ronda Rousey and the women’s bantamweight title is within Holm’s grasp, all she has to do is defeat the greatest WMMA fighter ever. Easy.

Or not, as all of Rousey’s opponents, none of which made it to the scorecards, have found out so far. The perceived advantage for ‘The Preacher’s Daughter’ is in the striking department, but don’t be fooled, this is MMA not boxing. Betting odds? Forget about it. But check out Holly Holm sparring a fan from the crowd!!!

Thanks for watching and we hope you’ve enjoyed the videos, be sure to stay tuned to LowKickMMA this fight week as we bring you more news, hype and opinion from UFC 193, from both ourselves and our awesome buddies Submission Radio.