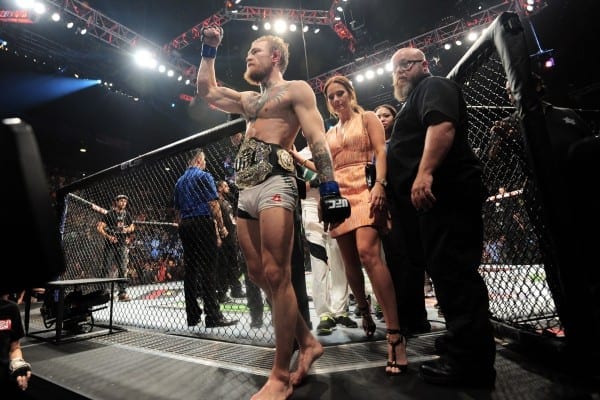 UFC 189 was being billed as the biggest card of the year, and one of the biggest in history, and oh boy it delivered. The event went down last night (July 11, 2015) live from Sin City in Las Vegas, Nevada, with the highly-anticipated featherweight interim title fight between Chad “Money” Mendes and the “Notorious” Conor McGregor acting as the main event.

Although he has had a triumphant rise to the top of the sport, McGregor has been highly criticized for not facing a true top-level wrestler, and that’s exactly what he got in the form of the former All-American Mendes. The “Notorious” one was taken down multiple times, and controlled on the ground, but he eventually rose to his feet and put his trademark striking to work.

McGregor landed a beautiful left hand that dropped “Money”, and finished him with a flurry of strikes in the second. The hype train has continued as the Irishman secured the interim title, and also earned a $50,000 “Performance of the Night” bonus.

Before the spectacle that was the main event, fans were treated to one of the greatest fights the sport has ever seen in the co-main event, as reigning welterweight king “Ruthless” Robbie Lawler put his title on the line against Canadian superstar Rory “Red King” MacDonald. The two battled back and forth in a bloody war, until Lawler proved his worth, finishing the “Red King” in the final frame. Both men were sent to the hospital, but at least they will both take home a $50,000 “Fight of the Night” bonus.

After a somewhat lackluster prelim portion of the card, the UFC 189 main card was opened in style in a bout of tough bantamweights as rising knockout artist Thomas Almeida took on veteran Brad Pickett. After getting rocked numerous times in the first round, Almeida came back and landed a picture perfect flying knee in the second to earn a second-round TKO, as well as a $50,000 “Performance of the Night” bonus.

What a night it was, as this event will go down as one of the best in UFC history. Stay tuned to LowKickMMA for all of your post-fight coverage.