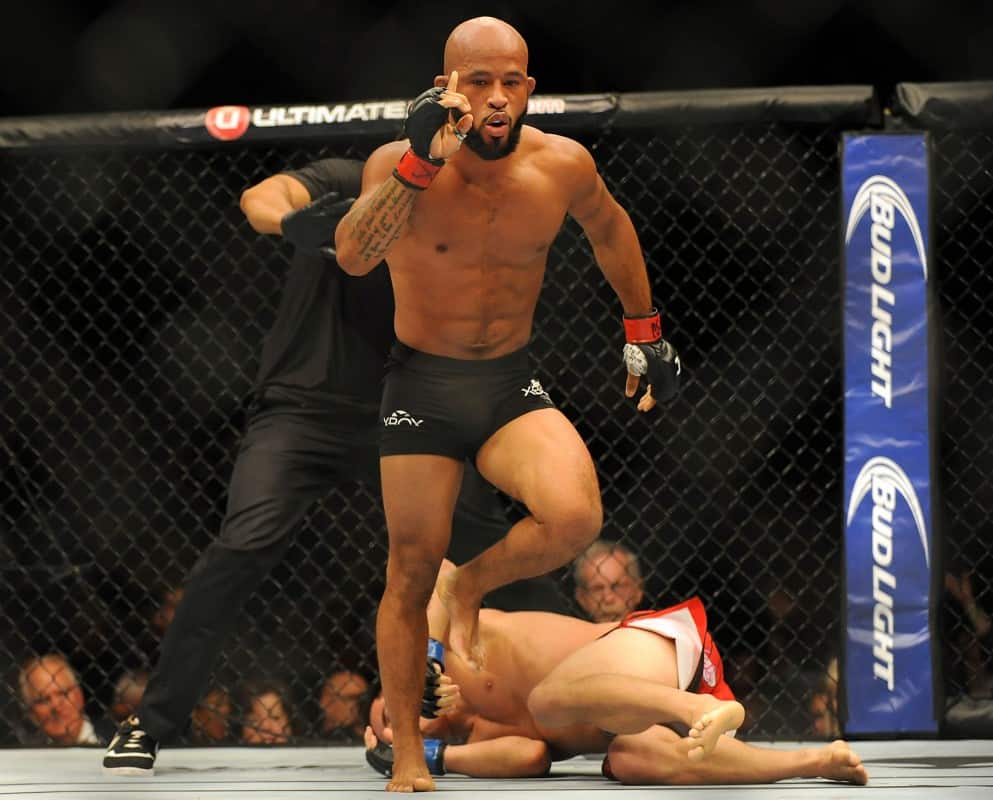 There’s not much else to say about “Mighty Mouse” other than he’s looked unstoppable as champion and isn’t receiving enough credit for it. His blend of speed, athleticism, and grappling is a sight to behold. Although Horiguchi has looked impressive during his 4-0 run in the UFC, he’s just not on Johnson’s level and has been fast-tracked to a title shot due to the absolute dearth of true competition at 125 pounds. I certainly think the hard-nosed Horiguchi is going to do better than the comicly overmatched Chris Cariaso did at UFC 178, but he’ll still falter in the face of “Mighty Mouse’s” world-class pedigree. Johnson by third round submission is my pick.

Demetrious “Mighty Mouse” Johnson is one of the top pound-for-pound fighters in the world and simply the best flyweight on the planet. He will look to defend his title for a sixth consecutive time tomorrow against No. 8-ranked Kyoji Horiguchi, who many are not giving much of a chance, and I’d have to agree. The Japanese-born Horiguchi seemingly has one punch knockout power and solid striking due to his karate background, but that’s about it. Johnson will be too smart and too fast to get caught by a big shot and the champion’s wrestling and grappling should simply outclass that of the challengers. I see “Mighty Mouse” getting another finish and once again making it look easy. Johnson by second-round submission.

Demetrious Johnson may just be the most underrated fighter in MMA today; the UFC flyweight champion has been on impeccable form as of late, but he faces one of the best karate specialists in the game at UFC 186. Kyoji Horiguchi might just have the key to unlock the riddle of “Mighty Mouse”, that being said, let’s consider the speed of DJ; the flyweight boss mixes footwork into his striking game to make it not only pleasing to the eye, but also very hard to counter. Given the recent moniker of fastest fighter in the sport, I think it will be Johnson that emerges victorious, though “The Supernova” will put up a courageous effort. “Mighty Mouse” wins by unanimous decision.

This bout obviously screams slugfest; perhaps more than any other UFC bout we’ve seen for quite some time. Rampage is looking for opponent who will stand an trade with him rather than wrestle, and he’s found the absolute epitome of that kind of fighter in the zombie-like Maldonado, who will certainly plod forward and eat 7-8 power shots to land a combo of his own. It’s hard to say that this fight being back on will save the grossly under-attended UFC 186, but it will certainly help. I’ve seen many pundits picking Maldonado in this fight, and with four wins in his last five bouts; that could certainly transpire. However, they haven’t exactly been against top competition, and I think Rampage has a little gas left in the tank. Maldonado is insanely hard to put away, so I say Rampage wins a decision in a war.

Quinton “Rampage” Jackson couldn’t have asked for a better fight for his return to the Octagon. Struggling most against wrestlers who want to take him down and hold him on the mat, he won’t have that problem with Brazilian slugger Fabio Maldonado, who will almost definitely stand right in front of Jackson and trade shots. However, I don’t see that working out for Maldonado. An angry Rampage having to deal with issues in court will come hungry and motivated to prove he can still hang in the UFC. I expect him to land a huge shot early. Rampage by first round TKO.

It’s a tough fight to pick in the co-main event, as we’ve seen many versions of Quinton Jackson show up in the past. Fabio Maldonado is no mystery, he likes to box and make things ugly. The Brazilian’s never-back-down attitude makes him a fan favorite, but it also earned him a rather savage beat down at the hands of Glover Teixeira. “Rampage” needs to show up in shape and motivated, that’s where I think this fight is decided. On paper, ‘Page smokes Maldonado; in reality it could be a very opposite affair. I like how smooth “The Iron Hillbilly” puts his punches together, but I also think he will be playing right in to his opponent’s strengths. Third round TKO for a triumphant Jackson.