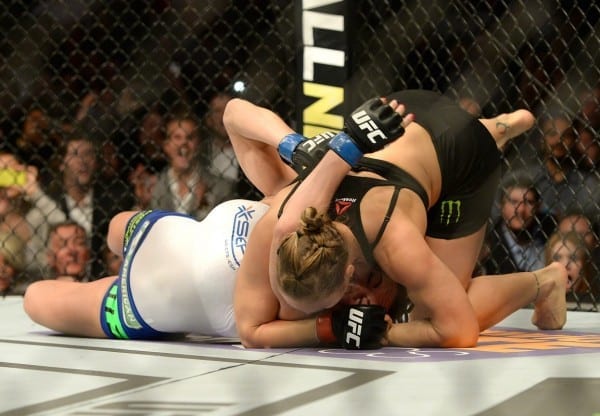 UFC women’s bantamweight champion Ronda Rousey broke the record for the fastest victory in a title fight for her 14-second submission of top contender Cat Zingano in the main event of last night’s (Sat., February 28, 2015) UFC 184 from Los Angeles, California.

It was yet another dominant performance from the steamrolling Rousey, who has now cleaned out her division of Top 5 contenders. She’s now an undefeated 11-0 with each of her wins coming by way of some form of destructive finish.

Simply put, Rousey is running out of legitimate competitors, and from the sound of things at the UFC 184 post-fight presser, she won’t be fighting Invicta FC featherweight champ Cristiane ‘Cyborg’ Santos until she proves she can make the bantamweight limit of 135 pounds.

But those are good problems to have as arguably the most dominant MMA fighter in the world. She was so dangerous tonight that highlights of her win over Zingano were hardly able to be compiled, but here’s what FOX Sports came up with: