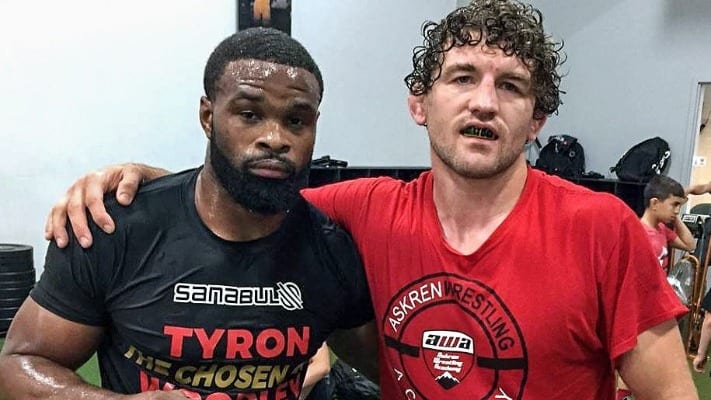 Earlier today (Sat. October 26, 2019) Demian Maia bested Ben Askren in the UFC Singapore main event. Maia submitted “Funky” in the third round of their grappling affair. It was a big setback for Askren, who was hoping to get in the title hunt after making his UFC debut earlier this year.

Now, on a two-fight losing streak, no longer undefeated, and 35-years-old, Askren’s window appears to be closing quickly. Askren’s teammate and UFC on ESPN analyst, Tyron Woodley, offered his thoughts on his training partner’s performance after the bout. Woodley explained what he thinks Askren could’ve done to have seen more success against Maia. (H/T MMA News)

“The thing about Ben, when I was looking down there yelling and screaming, if he would’ve thrown overhand rights and got his head off-line he would’ve been able to access the right leg of Demian Maia,” Woodley said.

“If he would’ve thrown that shovel uppercut and got his head off-line, he would’ve avoided those punches, he would’ve got close to the front leg which from a southpaw is gonna be his right leg. Getting to the back leg of Demian Maia is very difficult and when you go back there it’s a huge risk that you have to take, and I think that when you go for it with your head down and you’re trying to go for those strikes you put yourself in jeopardy.”

Woodley also explained that Askren might have been a bit overconfident in his ability to escape Maia’s submission attempt in the finishing sequence.

“As I said before, Ben likes to put himself in harm’s way because he knows he’s confident in getting out of it,” Woodley said. “This time he didn’t get out of it. I think he’ll go back home, I think he’ll look at the film and I think he can get back on the horse.”

What do you make of Woodley’s comments regarding Askren’s loss to Maia?