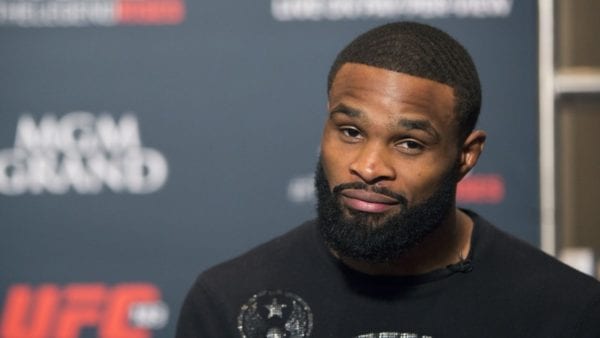 It’s Darren Till or bust for welterweight champion Tyron Woodley at UFC 228.

The #6 ranked Usman recently went on record as to state that he was the UFC’s plan B in case the challenger Till missed weight for his title fight against Woodley at UFC 228. It appears, however, that is not the case.

Woodley made it perfectly clear speaking to Ariel Helwani on his MMA Show, he isn’t afraid to fight anyone, provided he is given ample time to prepare for such a challenger:

“Me and Usman will fight at some point in time, and I’m with it,” Woodley said. “I’m with it, I’m with fighting him, I’m with fighting Mike Perry, all these dudes I respect. I like a person who brings true skillsets to the table and is a true fighter. I’m with it all day. But I’m not going to fight (Usman) on no 24 hours notice.”

“I’ve been training for a six-foot-three striker, a southpaw. Not a five-foot-ten poor stand-up. Negative. I don’t do what I do the best because I wing s–t, I train, I prepare, I strategize. I break my opponent down to a molecule and I drown them, I leave them empty, I take away all their best gifts, and then I snipe them. I’m not going to switch it up in five minutes.”

Love him or hate him, Woodley is the UFC’s longest current tenured champion and with that should come with some respect according to the self-proclaimed welterweight GOAT:

“I’m a world champion. I deserve proper notice, I deserve proper time to prepare and train for a world title that I worked so hard for. I’m not going to step in. I’m not that guy. Go grab f*ck*ng Cowboy (Cerrone); I’m a professional, and I’m a champion. If (Usman) wants to fight me, it’s going to be on a full training camp. And I would gladly take him up on that offer.”

It looks like Usman will get his chance at Woodley one day. However, as long as “The Chosen One” is champ he will dictate his fights and no one gets to fight Woodley unless he has ample time to prepare.