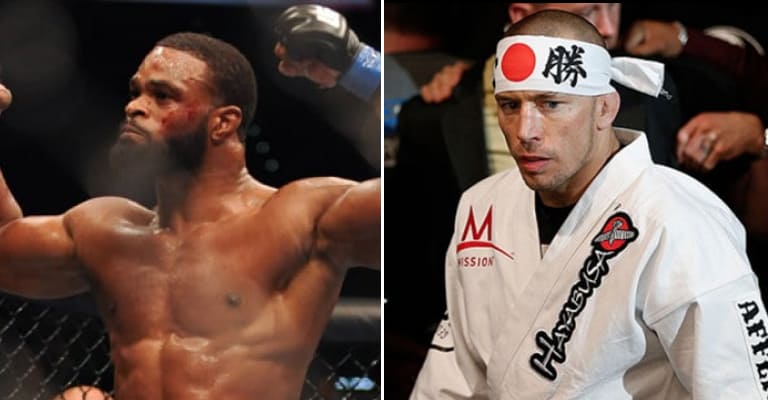 UFC welterweight champion Tyron Woodley has witnessed how fluid weight classes have become in the promotion; with former 170-pound kingpin Georges St-Pierre now middleweight champ, Conor McGregor going from featherweight to welterweight and eventually lightweight, it’s fair to say that weight classes are perhaps not as important as they were in the past.

Woodley was initially aiming for a fight with GSP prior to his announcement of moving to 185 pounds, so now the welterweight champion will have to consider moving up a division as well in order to secure that fight.

Woodley was also rumored to have had a fight agreement with Nate Diaz but said that Diaz failed to sign the contract. Without a fight in the foreseeable future, the welterweight champion discussed his desire for a fight with GSP and what he would have to do in order to do so:

“If I went up to 185 – before Georges started having whatever the condition he had, I considered making a move up to 185 and fighting at that weight class. (I’d give) up my belt at welterweight (if close friend and retired ONE FC champ Ben Askren were to sign with the UFC), and fight (GSP) for the middleweight title and stay at middleweight.”

“I’m not going up to middleweight because I think that would boost me on the pound-for-pound. I want to fight Georges, and he’s not fighting in my weight. So I’ll come up and see you there. And I do think there are some guys I can compete with in the middleweight division. I’m going to be so much faster. I don’t think I’m giving up that much power in the punching.

“Guys like Chris Weidman, Ronaldo ‘Jacare’ Souza, Luke Rockhold – (those) brothers have got some size on me. I have to be real creative. But in reality I think I’m a competitor and I will find a way to do what I need to do.”

Woodley acknowledged the possibility of his friend Ben Askren making the jump to the UFC following his retirement fight against Shinya Aoki. Askren said the only thing that could convince him to come out of retirement would be a shot at the UFC welterweight title.

These factors combined mean Woodley could be a middleweight in the near-future. With so many possibilities at both welterweight and middleweight, the champ says he wants to keep his options open:

“I’m open to any fight – anything that makes sense for me. But right now, I’m not putting myself on a box and saying, ‘These are my next guys.’ Who else is doing that? What other division beside my division is forced to actually compete against the No. 1 contender?

“That’s forced to say you have to fight this guy? Nobody else is in that position. With that said, I’m just keeping my options open.”

How would Woodley perform at 185 pounds? Could the welterweight champion hang with the middleweight division’ elite?