LowKickMMA.com
Home Boxing News Tyron Woodley Explains Why He Didn’t Go For The KO After Hurting... 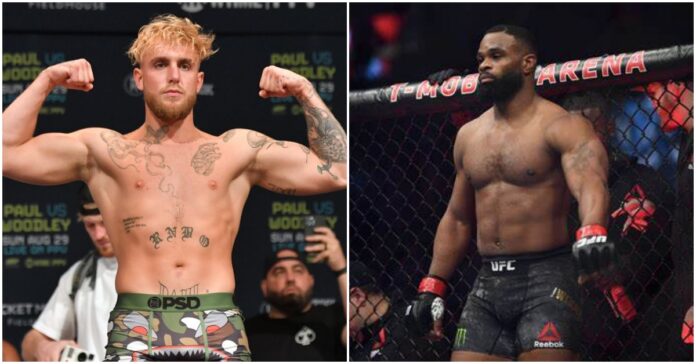 A lot of people expected Woodley to breeze through Paul ending the hype train there and then. However, Paul showed his boxing ability and beat Woodley via points. There was one moment during the fight however where Woodley knows he had Jake Paul in trouble.

In the fourth round, Woodley landed a left hand that sent Paul stumbling into the ropes and in quite some trouble, but Woodley wouldn’t push on at this moment to try and get his opponent out of there leaving many fans curious as to why.

Speaking on The MMA Hour Tyron Woodley revealed he had an injury that held him back during the pair’s first matchup.

“My shoulder was f*cking sore, Woodley said. “I ain’t gonna lie. I wanted to [knock him out] but my shoulder was swollen before and I was just kind of swinging on pure thug energy from MMA, not just giving a hell.”

“When you watch the punch, I punched him, he sprung off the ropes and he went back into my arm, so it kind of hype extended my elbow on my shoulder so at that point my money-maker was at jeopardy so I had to try and walk him down, make him punch so I could punch straight shots.”

“Straight shots off of his punches, very similar to what I had to do against Demian Maia when I tore my labrum in that fight.

“I couldn’t throw looping overhand rights because it made me feel like my shoulder was in jeopardy. So, my left arm and my right arm and my shoulder, they was just throbbing like a motherf*cker.”

Woodley vows to not make the same mistake twice and given the opportunity will look to get Jake Paul out of there as soon as he can. Although the former UFC Champion is still not happy with the judge’s decision from the first time around.

Woodley would also go on to mention despite him only accepting the fight on short notice, he has been training for the match-up since September.

“I would say probably the middle to the end of September, I brought all my coaches into St. Louis, Mo. the top of October [to start getting ready],” Woodley revealed. “You can go back and look at Instagram.

“I brought them into St. Louis, Mo. cause this fight [with Tommy Fury] don’t make sense. It’s not supposed to happen.” (transcribed by mmafighting.com)

Tyron Woodley and Jake Paul 2 is live on December 18 on Showtime pay-per-view.