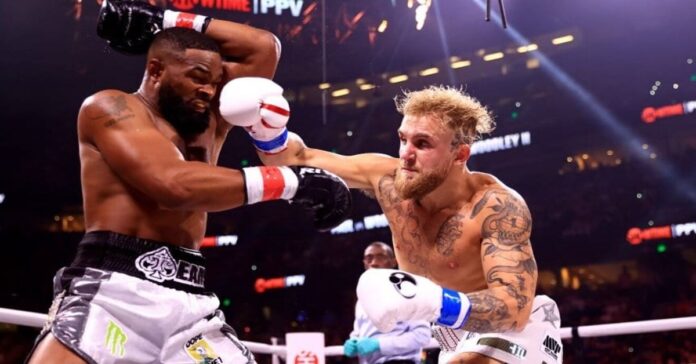 Former undisputed UFC welterweight champion, Tyron Woodley has sent a stern message directed at critics, haters, and trolls of his on social media following his stunning sixth round knockout loss to Jake Paul back in December – claiming the Ohio native would knock them out similarly.

Tyron Woodley, who ended his eight-year tenure with the UFC back in March following an opening round D’Arce choke to Vicente Luque as well as the completion of his contractual obligations, made the transition to professional boxing last year as well.

Headlining a Showtime! professional boxing event against the undefeated, Paul back in August, Woodley battled to a split decision against the YouTube content creator and social media star – suffering a judging loss over the course of 8 rounds.

However, on short notice last month, Woodley replaced an injured Tommy Fury to stand opposite Paul in an immediate rematch, where he suffered a devastating one-punch knockout loss in the sixth round.

The defeat came as Woodley’s sixth consecutively across professional combat sports, however, the St. Louis native had not been stopped by strikes since July 2012 in a vacant Strikeforce welterweight title fight against Nate Marquardt.

Speaking on the falk he has since received following his knockout defeat to the polarizing Paul, Woodley informed MMA Fighting that those who critique him would likely find themselves in dire straits against Paul.

“And a lot of people are saying that, ‘Aw, you lost to him (Jake Paul) again,” Tyron Woodley said. “‘Aw, you got knocked out.’ He would literally f*ck a lot of y’all up, like MMA fighters and other people that are just bumping at the gums, he’s an athletic kid that don’t have no job beyond this. He don’t have no kids, he don’t have no business running. He can have the best trainer, the best coaches, the best nutrition, the most focus. He can separate himself.” (Trancribed by MMA News)

Whilst neither Woodley nor Paul have yet to book their next respective outings, Woodley has been linked to a return to professional mixed martial arts, and in particular, a bout against former welterweight championship challenger, Dan Hardy.